A little piece of south Devon is leading the fight back against the modern day scourge of computer games, phones and Netflix.
Self-catering destination Beyond Escapes is harking back to a simpler time when the biggest thrill a child could have was building a den in the great outdoors.
Den-making kits, including ropes, groundsheet, camouflage cover, pegs, a hammer and guides on foraging for natural materials, can be borrowed free of charge to enjoy in the grounds.
The BE Wild! initiative follows a study by Beyond Escapes of 1,000 parents which found that over a third don’t think their children spend enough time playing outside.
Although 32 per cent had built dens with their children during the past six months, these were made mainly from sheets, curtains, chairs and towels – and in the lounge!
Mark Sears, from The Wild Network, commented: “Getting kids outside, detoxing from their smart-phones and tablets and ultimately re-wilding them is what we are all about.
‘’Beyond Escapes approached us with this great idea to introduce den making kits at its Devon resort, which we have helped advise on. I’m sure it will be a huge success.”
It was certainly an activity that will live long in the memory of our family of four, even if it was only the boys who made use of the camouflage paint provided.
. 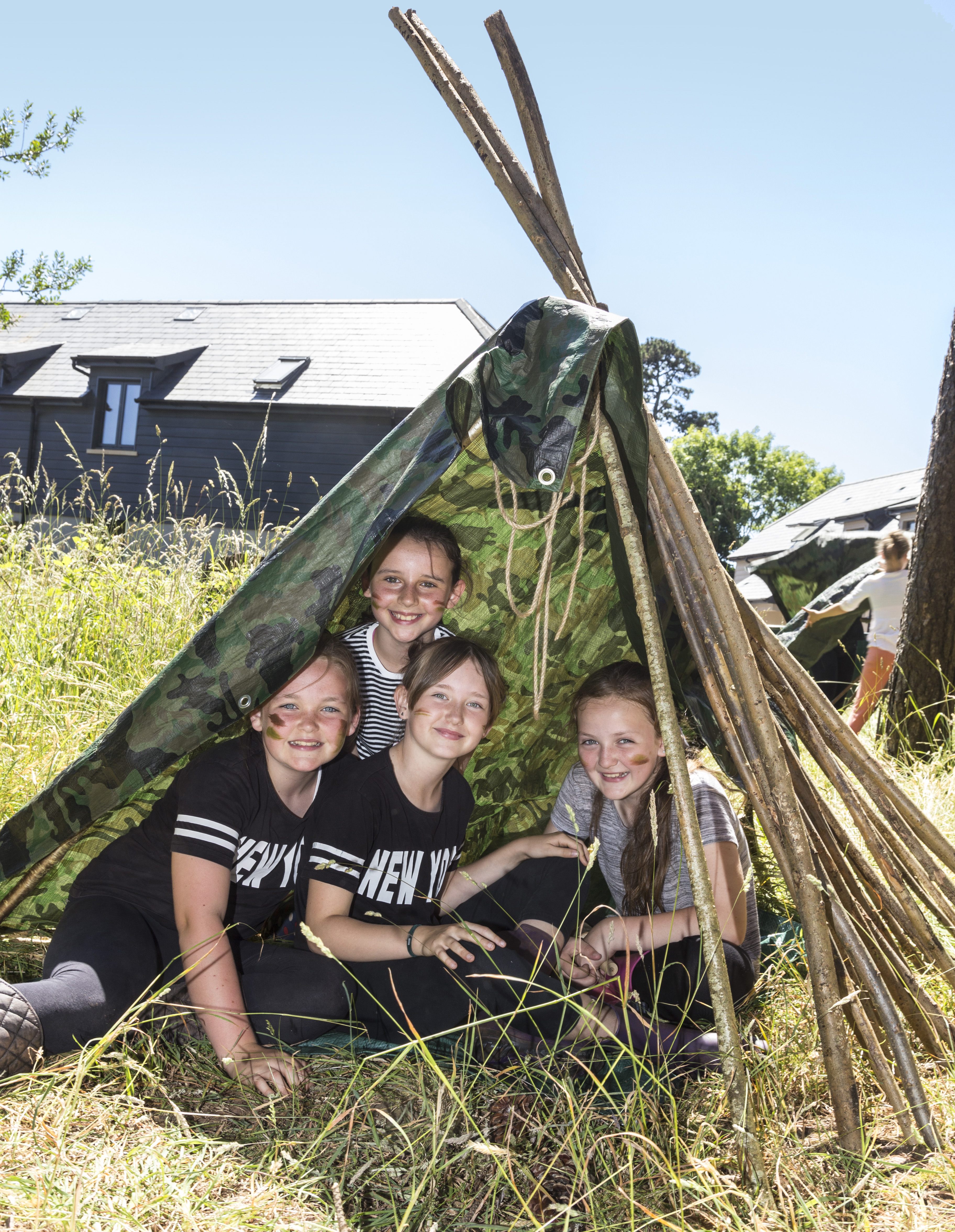 Den building at Beyond Escapes Devon
.
We were staying at Beyond Escapes during Halloween week, and on arrival at our two-bedroom lodge we found a couple of pumpkins and carving kits, plus details of a fancy dress competition.
To further enhance the site’s kid-friendly credentials, it had created a spooky trail in the grounds and the fantastic prize for completing a quiz was a bowl of ice cream topped with ‘dirt’ and ‘worms’.
Much better, my kids agreed, than a sticker.
They tucked into their treats on the restaurant’s elevated terrace, as their mum and I sipped coffees and admired the beautiful view across the valley to Torbay.
The restaurant uses fresh and locally-sourced ingredients
for its dishes, as well as offering tempting takeaways and hearty breakfasts, which can also be delivered to your accommodation.
Below it is the spa, a tranquil sanctuary with heated loungers, a vitality pool on the terrace and a menu of treatments. There’s also a gym where the views put a spring in your step as you pound the treadmill.
.

.
Beyond Escapes, located in the glorious south Devon hills at Berry Pomeroy, a few miles from both the historic town of Totnes and the popular seaside resort of Paignton, was opened earlier this year.
The restored Mansion House was formerly owned by a co-founder of Paignton Zoo in 1923, and later by the disc jockey and Ready Steady Go! presenter Keith Fordyce, who turned it into the Torbay Aircraft Museum.
It has now been transformed into luxury one, two and three-bedroom suites. Elsewhere there are apartments and contemporary two, three and four bedroom lodges.
Our lodge, no.15, was in a woodland setting and came with a large, private decking area with outdoor furniture and a hot tub that four people could really stretch out in.
Downstairs was an open plan lounge, kitchen and dining room, furnished to a high standard, while a central staircase led to a double bedroom and a twin bedroom, both with deep mattresses and en-suite bathrooms.
The easily adjustable underfloor heating gave the lodge a cosy feel, and the free wifi, children’s games and three TVs with Sky helped keep us entertained.
.

.
But you’re never short of things to do in this part of the world.
Just down the road is the romantic ruin Perry Pomeroy Castle, and a little further away is its English Heritage stablemate Totnes Castle, a classic Norman motte and bailey fortress.
Totnes is also home to a rare breeds farm and from the town you can take a river cruise down to Dartmouth, where castle fans are in for another treat.
Our kids loved exploring the prehistoric Kents Cavern in Torquay and playing pirates on the full-size replica of Francis Drake’s Golden Hind in Brixham Harbour.
Great free attractions include Cockington Country Park, the Geoplay playground in Paignton, and the Napoleonic-era fortresses at Berry Head, near Brixham.
Berry Head is also home to a lighthouse that’s both the shortest and highest in Britain – the building is a modest 16ft tall, but sits upon a headland 190ft above sea level.
Another free attraction close by is House of Marbles, at Bovey Tracey, where one of the marble runs is so large it covers more than one wall, and the marbles have been replaced by snooker balls.
These are just a taste of all the family-friendly attractions in the area, and Beyond Escapes makes a perfect base for enjoying them.
.

.
Travel file
Adrian Caffery and family were guests of Beyond Escapes Devon. Prices start from £210 for a two-night break in a lodge with hot tub, sleeping up to four in two bedrooms. Many lodges are pet friendly,while some have been created with babies in mind. To book, visit beyondescapes.co.uk, email behere@beyondescapes.co.uk or call 03301 274300.

One thought on “South Devon”