It’s a view that could inspire the artist Damien Hirst and put a spring in the step of triple jumper Jonathan Edwards.
But more of those two later…
We were staying on the fourth floor of Granville Point, an imposing, castellated former Victorian hotel in the centre of Ilfracombe.
The views from our apartment, called Ocean Breeze, stretched far and wide, from the town’s seafront across the Bristol Channel to south Wales.
There’s a balcony off the stylishly furnished lounge / kitchen / diner and an even bigger one off the spacious double bedroom.
And as we were holidaying in Devon during this year’s heatwave we were blessed with some stunning sunsets as we sat there, glass in hand.

Granville Point is on a quiet road so there was nothing to disturb the sound of seagulls squalling and waves rolling in, seemingly beneath our feet.

Having said that, helicopters from a nearby RAF base occasionally swooped low over the apartment in scenes reminiscent of Apocalypse Now!
My wife and I were even able to take in the views as we showered in the en suite bathroom, while retaining our dignity at all times.
The twin bedroom has a Juliet balcony, the door to which we kept locked in case our two children couldn’t control their inner dingbats.
.

.
We were just a hop, skip and jump away from Ilfracombe’s seafront gardens where we were surprised to find a tribute to Jonathan Edwards.
The Olympic gold medal winning triple jumper moved to the town in 1976, when he was aged 10, and stayed there for 11 years.
Commemorating his 23-year-old world record, mosaic circles with bronze prints of Jonathan’s feet mark the points for each stage of the 18.29m leap.
Of course, I had to see if I could better the mark, but it turned out to be more of a hop, hop, hop, skip, skip, skip and collapse.
The gardens are also home to Ilfracombe Museum, described as ”a cross between an Edwardian collector’s study and your granny’s attic’’.
A shrunken head and rows of pickled bats are just two of the many curios in this fascinating place.
Our daughter was excited to hold a mammoth’s tooth while we had to drag our son away from the ship to shore radio station.
Next to the museum is the eye-catching Landmark Theatre, known locally as Madonna’s bra because of its unusual double conical design.
. 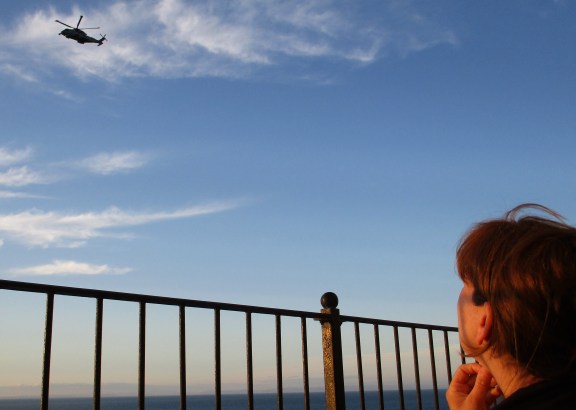 Helicopter watching from Ocean Breeze, Ilfracombe
.
Here, too, is the tourist information centre, where I’d heard visitors could pick up a family-friendly ‘treasure’ trail.
I had expected it to be free but the eight-page leaflet cost a whopping £6.99, which I reluctantly paid having already promised it to my eldest.
And the trail turned out to a murder mystery based on the game Cluedo – cue ”what’s murder, Daddy?’’, instantly killing the holiday mood.
It got worse. We spent half an hour trying (and failing) to solve the first couple of questions and gave up completely when bamboozled by no.11…
”Along the Royal Britannia Hotel, deduct the date linked to W. Willis from the date relating to The Bath House and add the date found near a drawing by G Rowe,’’ it read.
And this was supposed to be for ‘‘ages six upwards’’! Still, at least the trail took us to some more of the town’s sights.
The walk to the top of Capstone Hill was well worth the effort and from there we could really appreciate our apartment’s prominent position.
Here, too, we found a moving statue in memory of a 14-year-old Russian student who in 2000 fell to her death from a cliff just along the coast.
. 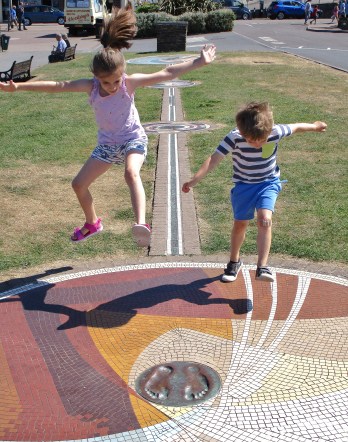 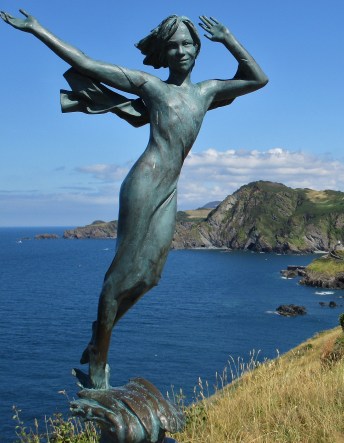 Tribute to a tragic Russian student 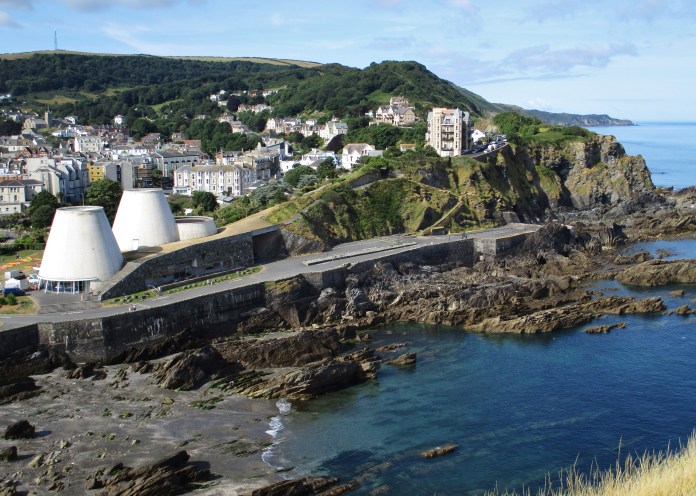 View from Capstone Hill, with Landmark Theatre left and Granville point on right
.
The trail also led us up Lantern Hill, where a small chapel overlooking the quay doubles up as the UK’s oldest working lighthouse.
And from the end of the quay pier, our kids were able to make out the outline of a ‘sleeping’ elephant’ in the face of Hillsborough cliff.
Much easier to spot in this part of town – in fact it’s utterly unmissable – is a striking sculpture by Damien Hirst, the ‘‘enfant terrible’’ of the art world.
‘Verity’ is a bronze work of a pregnant woman. She stands on a base of scattered legal books and holds a sword and scales.
A ”modern allegory of truth and justice”, its sheer scale – at over 20m it’s the tallest statue in Britain – is what grabs the attention.
But what keeps your attention is that an anatomical cross-section of her head and torso reveal her skull and a foetus inside her womb.
Perhaps not what you would expect to find in a traditional English seaside town, and it certainly divides opinion – much to Hirst’s pleasure, I’m sure.
Whilst admiring the statue, I discovered there’s a finite amount of time you can spend talking about modern art to children aged four and seven.
. 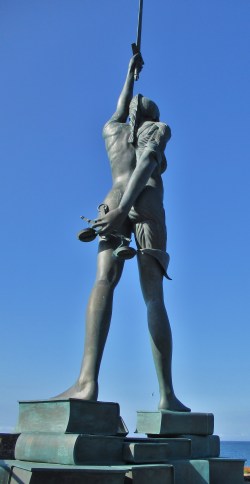 Damien Hirst’s ‘Verity’ in Ilfracombe
.
Inevitably, the question ‘‘can we go to the beach now?’’ rears its head and that, indeed, is where we spent the majority of our week in Devon.
There’s a small, sandy stretch at Ilfracombe’s harbour, where you can paddle your feet when the tide is in.
But if you really want to let your kids off the leash, the three-mile long beach at Woolacombe is only a ten-minute drive away.
The equally attractive beaches at Croyde and Saunton are a little further away and both, like Woolacombe, have excellent facilities.
Back in Ilfracombe, the pebbly Tunnels Beaches are the town’s no.1 visitor attraction, and they are just around the corner from Granville Point.
Victorian entrepreneurs employed Welsh miners to carve out the tunnels through a hillside to enable access to the rugged coastline.
Tidal swimming pools were created (one for gents, one for ladies) and Ilfracombe grew from a tiny fishing village to a bustling seaside resort.
.

.
The Ladies Pool is still there, visible for three hours before and after every low tide, and is great for swimming and snorkelling and for dinghies.
There are fascinating information boards throughout the tunnels, including some guides to Victorian era bathing etiquette.
And a newspaper report from 1859 remarks that two men who intruded into the Ladies Pool would be ‘‘outed from civilised society’’.
I wonder what the paper would have written about the nude swimmer we spotted from our balcony.
How times have changed!
.
Travel file
.
Newspaper article here