Once upon a time there was a land where children of many different languages could come together to live their dreams.
They loved its thrilling rides and tales of good overcoming evil. But sadly,  too few families fell under the spell of this Magic Kingdom.
For starters, it rained… a lot. And secondly, an optimistic pricing structure meant that once they’d arrived, many parents could not afford to feed their children.
The wonderland teetered on the brink of financial ruin. Investors were ready to cut their losses and journalists circled like vultures predicting its demise.
But just as it looked as if all hope had gone, a plan to lower the cost of hotels, meals and merchandise doubled visitors and the park was saved for future generations.
Now, it brings more joy to more children than ever before and only last year opened a new attraction that unlocks the secrets of the cinema.
The history of Disneyland Paris reads like a fairy tale. Ok, so it still  rains just as much, but its tricky early years now seem like the stuff of myths and legends.
Twenty miles east of the French capital, it’s a great place for the young and young-at-heart to enjoy a long weekend. And it’s probably easier to get to than  you think.
Eurostar runs a service from Waterloo at 9.27am every day, stopping just the once to pick up more thrill-seekers at Ashford in Kent (10.27am).
We drove down from the Midlands to Ashford on a Thursday evening and stayed  at a handy Travel Inn just off the M20.
The hotel (£44.95 for a double room) was just five minutes from Ashford International station where you’ll find plenty of parking.
You can check in on board the Eurostar and have your luggage taken to your Disney hotel on arrival. You’ll also be given your three-day Hopper park pass.
And the train stops at Disneyland’s gates which means you can be in the  shadow of Sleeping Beauty’s Castle a little more than two hours after setting off.

Mad Hatter’s Tea Cups, Disneyland Paris
pp
We needed the remainder of Friday and all of Saturday to do justice to Discoveryland, Fantasyland, Adventureland, Frontierland and Main Street USA.
There are three unmissable rollercoasters – Space Mountain, Big Thunder Mountain and the rickety Indiana Jones and the Temple of Peril: Backwards.  Yes… backwards!
Favourite shows include Mickey’s Winter Wonderland and the 3D Honey I Shrunk The Audience. Snow covers you at the former, while ‘mice’ scamper up your legs  at the latter.
Then, of course, there’s the Wonderful World of Disney Parade which pays homage to 70 years of Disney films with song and dance and lots of smiley faces.
Sadly, we were among the last visitors to catch the Main Street Electrical  Parade. The plug has now been pulled on this dazzling spectacle.

Disney Parade
pp
We stayed at the nautical Newport Bay Club Hotel which is Europe’s largest with 1,093 rooms. It overlooks Lake Disney and boasts its own swimming pool and  health club.
From here it was a ten-minute walk to Disneyland and half that to Disney Villlage, where you’ll find several themed restaurants plus a Wild West show.
There is even a nightclub which has free entry for hotel guests, but  beware… it’s £5 a pint and there was something fishy about its angling theme.
We arranged to have our luggage transferred to the railway station so we could  make the most of our last day, which was spent at the year-old Walt Disney Studios.
These ‘film lots’ next door to the main park are based on the Disney MGM Studios in Florida and the attractions here are designed to take your breath away.
On the Rock ‘n’ Rollercoaster you’ll accelerate from 0-100 kilometres an hour  in under three seconds and experience more G-forces than an astronaut – all to the music of Aerosmith.
Armageddon, based on the Bruce Willis blockbuster, is hot stuff, while Cinemagique brings 100 years of the movies to life – quite literally.
The hour-long auto stunt show is a real crowd pleaser and the Studio Tram Tour is like being in your own disaster movie. What a day!
After all that, it was a short walk back to the train station where our luggage was waiting for the journey home.
I love a happy ending. 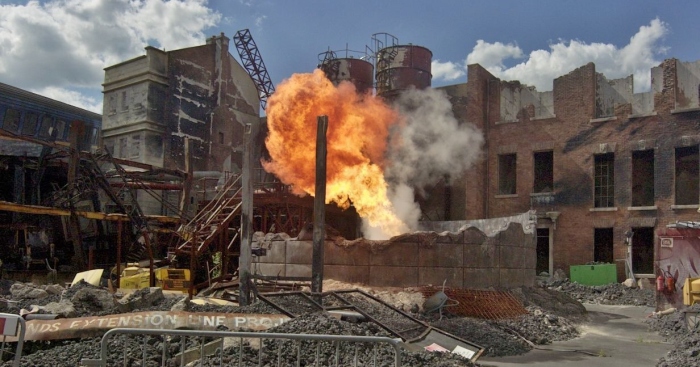