The last thing I expected to stumble upon while exploring County Wicklow’s countryside was a walk-through birth canal (to put it politely).
Nor did I expect to see several statues of the Hindu god Ganesh (one holding a pint of Guinness) or the world’s largest fasting Buddha (with a mobile phone tucked in his back pocket).
But Victoria’s Way, a thought-provoking and sometimes amusing sculpture garden inspired mostly by Hindu and Buddhist philosophy, was definitely a surprise of the nice variety.
The attraction is owned and maintained by 72-year-old Victor Langheld, who my wife and I met as we admired the artworks, wide-eyed, with our 20-month-old daughter.
A family inheritance allowed Victor to spend most of his life travelling to spiritual sites across Asia, before returning to start work on his 20-year labour of love.
The 25 sculptures, designed by Victor and modelled by master craftsmen in India, are mostly made of black granite and range in size from 5ft tall (2 tonnes) to 20ft (10 tonnes).
Victor told us that his ‘’meditation park’’ was aimed at adults aged 30-50 who may be feeling the need to reassess the quality and direction of their lives. Something otherwise known as a mid-life crisis.
/ 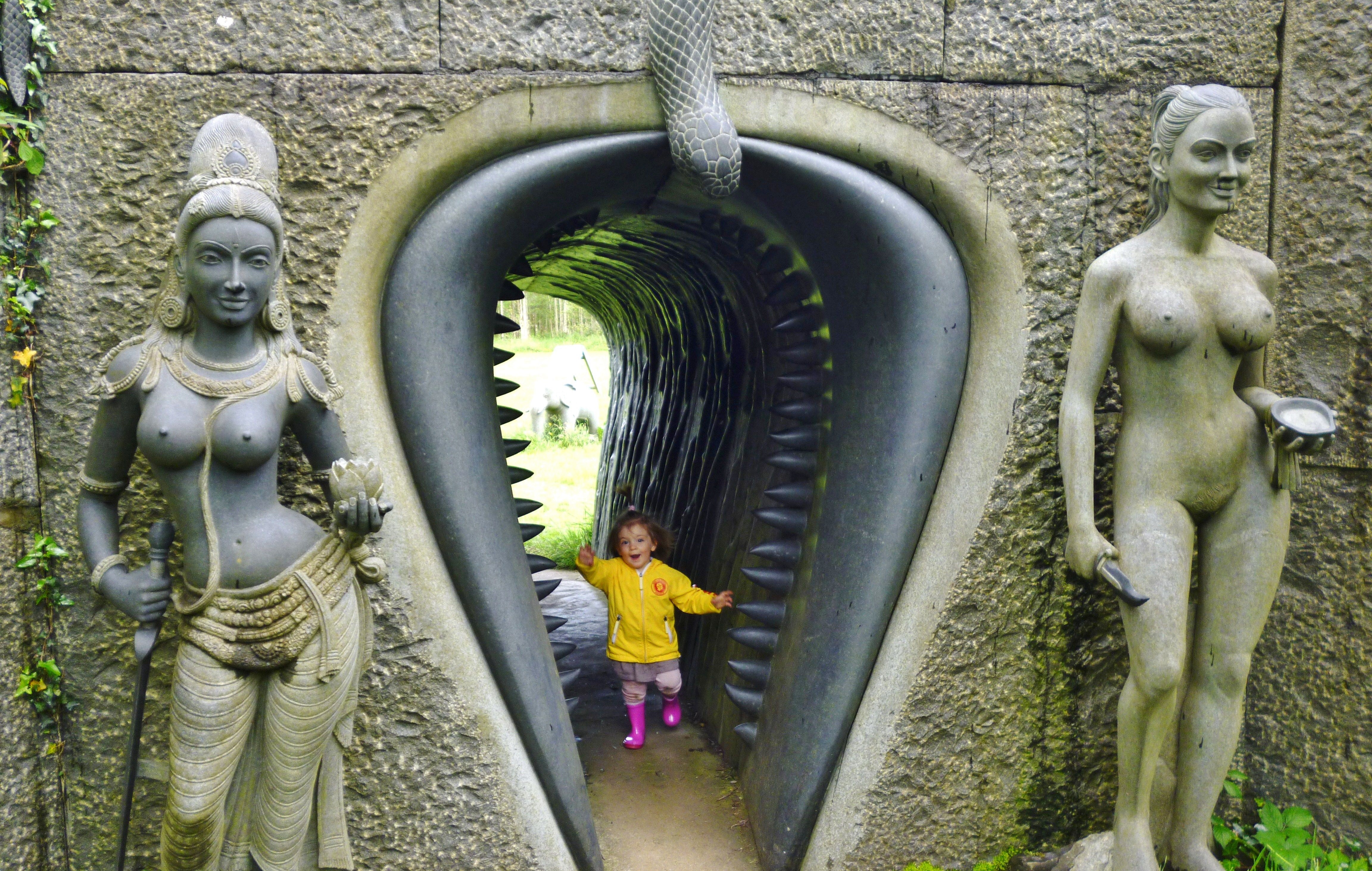 Victoria’s Way, County Wicklow
/
Seven startling sculptures in the ‘enchanted forest’ represent the journey from a state of non-awakening to enlightenment and are imbued with spiritual insights.
The birth canal was modelled on the idea of vagina dentata – yes, it has teeth! – warning that the garden could be a dangerous place to enter, psychologically if not physically.
Its deeper meaning was lost on me and I just delighted in watching my daughter gleefully running through it, although for my wife, this brought back painful memories.
The nine, magnificent Ganesha are in various poses – dancing, playing musical instruments, reading or reclining – and we had to smile at the little motifs of modernity.
Other statues include a large python-shaped seat, a 15ft solitary index finger pointing at the sky and interpretations of Shiva, Eve and others.
At the end of our walk through the garden we found a photo exhibition showing how the sculptures were crafted – each one taking up to a year – and exported, at great expense, to Ireland.
We were staying a half-hour’s drive from the sculpture park at Woodstock Demesne Holiday Homes, between Newtown-mountkennedy (yes, that really is just one word) and Kilcoole.
/ Woodstock Demesne Holiday Homes, County Wicklow
/
These spacious self catering properties, managed by Trident Holiday Homes, are located within the grounds of the five-star Druid’s Glen Hotel & Resort.
Our three-bedroom home for the week had an impressively well-equipped kitchen-diner, a stylish lounge and a large balcony off the master bedroom overlooking the landscaped grounds.
The holiday homes are less than an hour from Dublin’s ferry ports and ideally placed to explore the many and varied attractions of Wicklow, known as the Garden of Ireland.
Powerscourt House has a stunning Italian garden with views across a lake to the 500m Great Sugar Loaf Mountain, east Wicklow’s most prominent landmark.
Its Japanese garden is even more impressive, while the Palladian mansion, which was gutted by fire in 1974, has been renovated to include a small, upmarket shopping centre.
Wicklow’s biggest draw, its mountains, were once a safe hideout for opponents of English rule – a kind of 18th century Tora Bora.
But following an uprising in 1798, the English decided to flush out the rebels by building what’s now known as the Military Road through the heart of the mountains.
/

Powerscourt House and Gardens, County Wicklow
/
The remote pass cuts through a vast expanse of blanket bog and made for an exhilarating 90-minute drive during which we saw no other signs of life.
Near one end of the Military Road is the lakeside monastic settlement of Glendalough, established in the sixth century by St Kevin. Its 33m round tower is one of the finest in Ireland.
An hour’s drive south, past Wicklow town and its historic jailhouse, is Brittas Bay, a two-mile stretch of Blue Flag sandy beach with dunes which make for a perfectly sheltered picnic spot.
Closer to home, at Kilcoole, our daughter enjoyed the soft play area in the town centre and getting up close to a wide variety of farm animals and pets at Glenroe Open Farm.
There was certainly no shortage of things to do. Mountains, beaches, gardens, ancient monuments and, ahem, giant genitalia. What more could you ask for!
/