First, Thomas the Tank Engine steamed into Drayton Manor. Then Peppa Pig and her family trotted off to Paultons Park in Hampshire.
Now, Postman Pat, Igglepiggle, Tree Fu Tom and Mike the Knight, among others, have set up home together in CBeebies Land at Staffordshire’s Alton Towers.
The attraction features characters from many of the BBC’s favourite children’s programmes and my three-year-old daughter Cerys couldn’t wait to visit.
We followed Mr Tumble’s spotty bag trail in the Something Special Sensory Garden and we had a peek inside Charlie and Lola’s bedroom.
Then we learned all about the five senses with hands-on experiments in Nina’s Science Lab and tested our mettle in Tree Fu Tom’s Training Camp (an adventure playground).
Unfortunately, Mr Bloom was on ‘‘holiday’’ so some cloned female versions (complete with Northern accents) were looking after his nursery when we visited.
Cerys and the other tiddlers fed the hungry Compostarium then met the veggies, including Sebastian the singing aubergine who did what he does best.
As for the rides, the wait times on the afternoon of our visit were all under 10 minutes so Cerys was almost able to jump straight back on after they’d come to a halt.
She enjoyed the Numtumbs Number-Go-Round and was excited to take the steering wheel of Postman Pat’s delivery van as it tooted around Greendale.
A slow boat ride took us into the Night Garden where we floated past Makka Pakka, the Haahoos and the Tomliboos (who are as weird as they sound!).
. 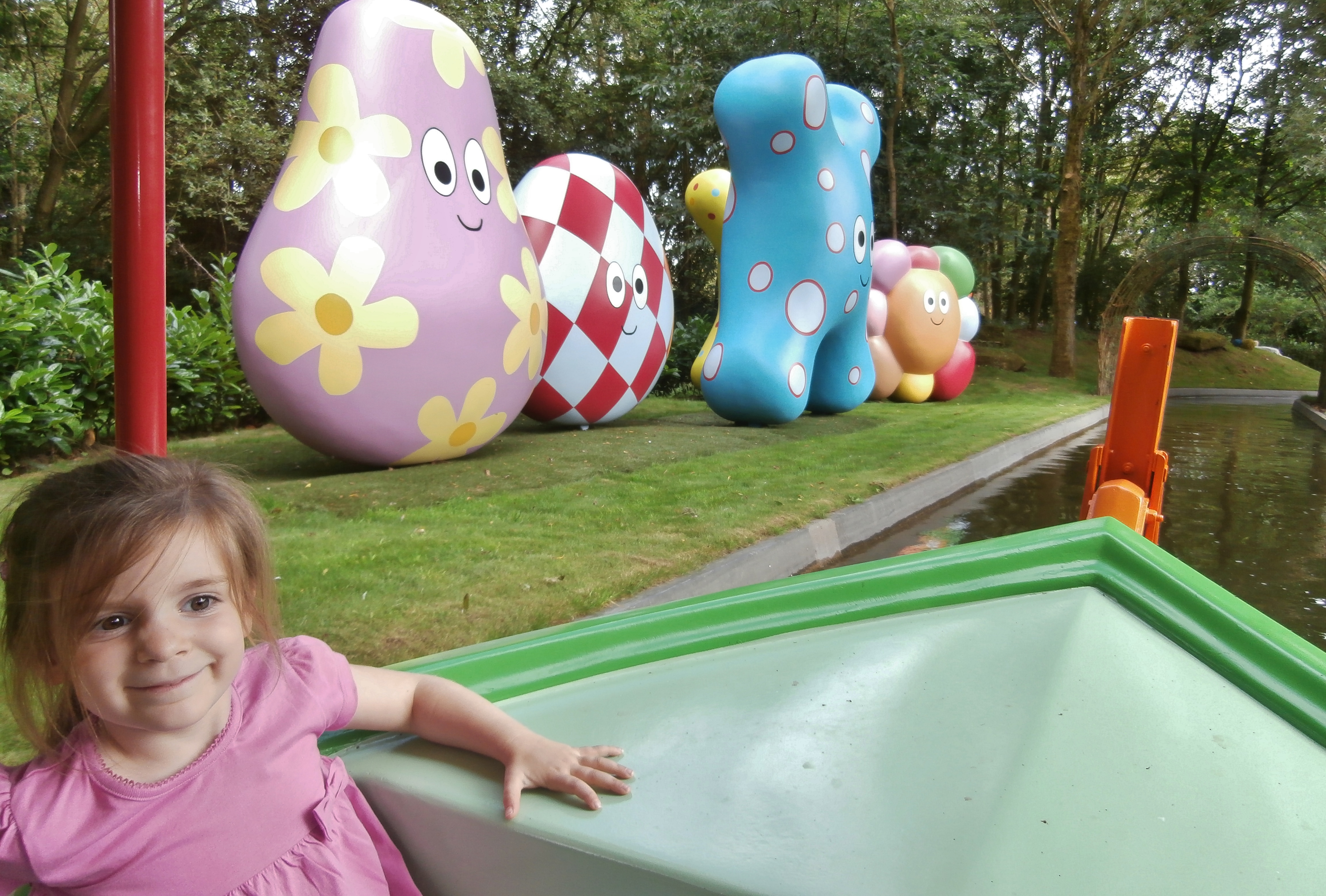 CBeebies Land, Alton Towers
.
Our favourite was the Tree Top Adventure ride which gave Cerys an aerial view of much of CBeebies Land.
The only attraction that got a thumbs down was Justin’s House Pie-O-Matic Factory, where sponge balls are blasted out of pressurised guns.
It seemed more suited to a stag party and while Cerys managed to dodge the balls I can vouch that they sting when they hit you full in the face.
An open air arena at the heart of CBeebies Land is the venue for rolling 15-minute shows where children can sing and dance with their favourite primates, The Zingzillas, and learn to ‘‘be a knight and do it right’’ with Mike The Knight.
They posed for pictures with Cerys after the shows.
Night Garden’s Igglepiggle and Upsy Daisy also turned up but it seemed Postman Pat, Tree Fu Tom and the rest were camera shy. Shame that.
The arena is also a good place for a picnic. There were circus entertainers and plenty more to keep young ones entertained in between shows.
But it was the incredibly helpful and enthusiastic staff who impressed me most.
The little things they did went a long way to making our visit so memorable – from offering to take a family photo to the parting gift of a CBeebies badge for Cerys.
They were even a match for Mickey’s lot at  Disneyland Paris, which we visited last year – and that’s something I never expected to write about a British theme park.
. 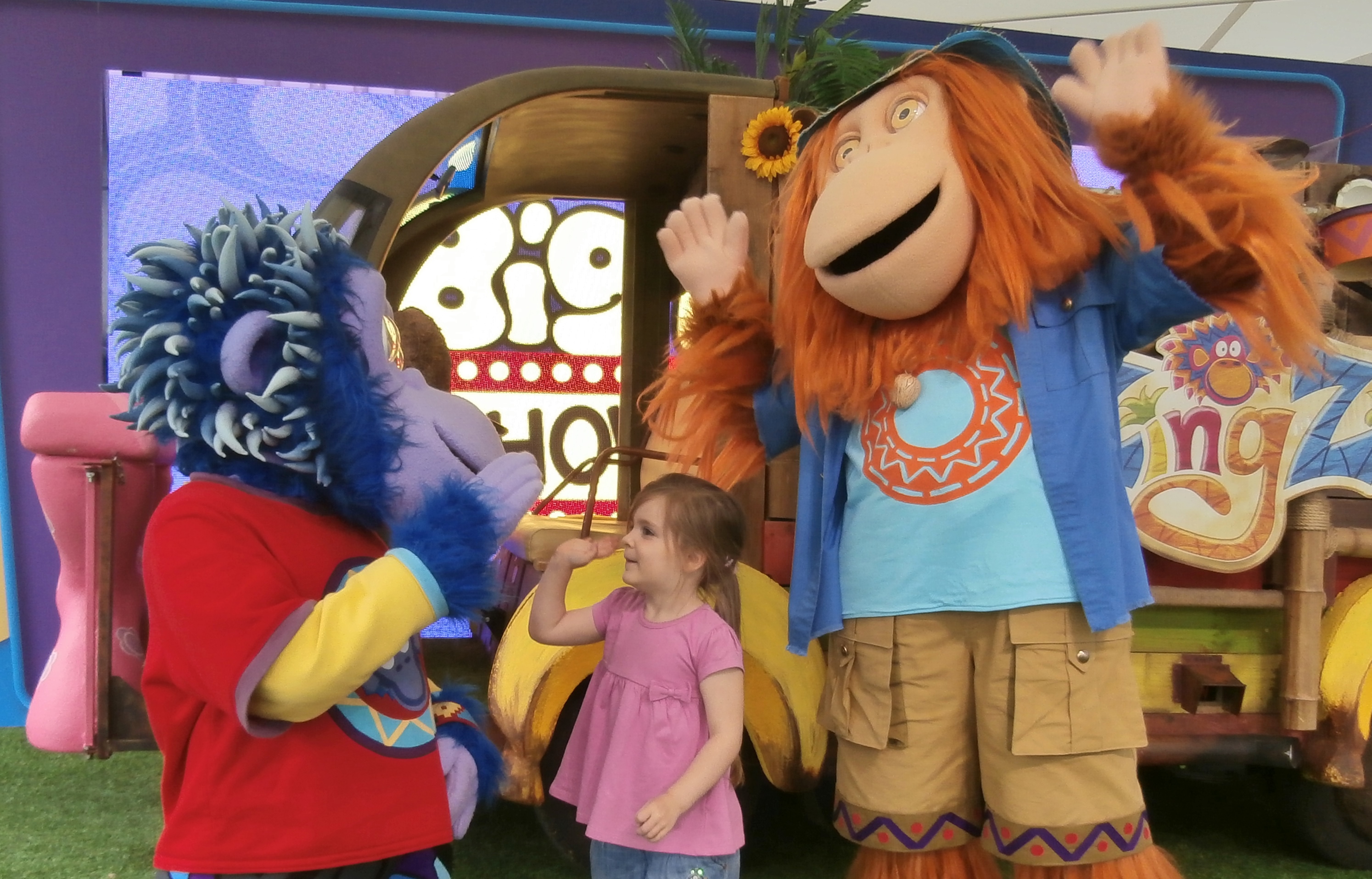 CBeebies Land, Alton Towers
.
Travel file
CBeebies Land forms part of Alton Towers, Britain’s foremost white-knuckle ride theme park – which means entry tickets are not cheap. But canny mums and dads can make big savings if they play their cards right. Tickets on the gate or booked the day before cost a whopping £49.20 for adults, £43.20 for children and £24.60 for seniors. A family ticket costs £42.60 per person (max two adults). However, tickets booked online at least seven days in advance are 25 per cent cheaper – £36.90 for adults, £32.40 for children, £18.45 for seniors and £31.95 per person for a family ticket.  Bizarrely, four to 11-year-olds are classed as adults. Under-fours go free. You can save even more if you are visiting with a child aged under four by purchasing a Parents and Toddlers ticket seven days in advance. With this ticket, entry prices drop to £31.05 for every visitor, both adults and children. That’s still not the cheapest day out you’ll ever have – but there’s a way to make your money go much further. For an extra £6 per paying adult or child (again, when booked seven days in advance) you can return to the theme park the next day. This makes sense because Alton Towers has many more attractions besides CBeebies Land that are suitable for young children and their little legs will never be able to tackle the sprawling site in one day. So, with a Parents and Toddlers ticket, this works out at £37.05 per day for two days at the theme park for a mum, dad and one or more children aged under four. You can buy next day return tickets at the exits but the price rises to £9. Also at the exits you can choose to return on any other day for £15 per person.
.
Alton Towers, north of Uttoxeter, is open until November 9. See www.altontowers.com
​For details of hotel accommodation at Alton Towers click here
.