New Year, in the eyes of many, is a time to dig out the tracksuit and work off those Christmas calories.
But this Scrooge-like tradition is not one I adhere to. I much prefer to keep the festive chocs coming and the booze flowing for as long as possible.
Which is why the offer of an “indulgent’’ New Year break at the best positioned hotel in Britain’s best seaside resort really tickled my tastebuds.
The four-star Bournemouth Highcliff Marriott is perched on West Cliff and boasts incredible views of the town’s seven miles of sandy beach.
From our window, we could follow the curve of the bay left to Hengistbury Head then across to the Isle of Wight and its iconic stacks of chalk, The Needles.
And looking right, the shoreline stretches to Poole, the millionaires’ hideout of Sandbanks and the so-called Isle of Purbeck with its own chalk towers, Old Harry Rocks.
The prominent hotel is centrally located, just a five to ten-minute walk from the shops, the beautiful Lower Gardens, the pier and the Oceanarium sea life centre.
Originally designed as a terrace of four mansions, the hotel was opened in 1873 as Highcliffe (with an ‘e’) Mansions, quickly attracting aristocratic clientele.
The Highcliffe, as it became known, was constantly being confused with a Highcliffe Hotel ten miles away and both owners tossed a coin to see which would have to lose its ‘e’.
.

.
It has proved popular with politicians over the years, with Clement Attlee, Harold Wilson, James Callaghan, Margaret Thatcher, John Major and Tony Blair all gracing its corridors.
Our weekend in Bournemouth began with a “Chocolate Indulgence’’ afternoon tea for two in the Highcliff Lounge and Bar, which also has sea views.
The cakes included milk chocolate macaroons, dark chocolate and chilli torte, and white chocolate and Baileys pannacotta. There was even chocolate in some of the scones.
The finger sandwiches included smoked salmon, honey-roasted ham and roast beef & horseradish – but I think the hotel missed a trick not including Nutella!
Guests can work off the calories in the hotel gym or swimming pool, or try sweating them off in the sauna and steam room.
But we opted for a more leisurely walk along the prom, which can be reached from the 98-year-old West Cliff funicular railway directly opposite the hotel.
Our overnight stay and afternoon tea formed part of an Indulgence package which also included breakfast, car parking and a very civilised 2pm checkout.
. 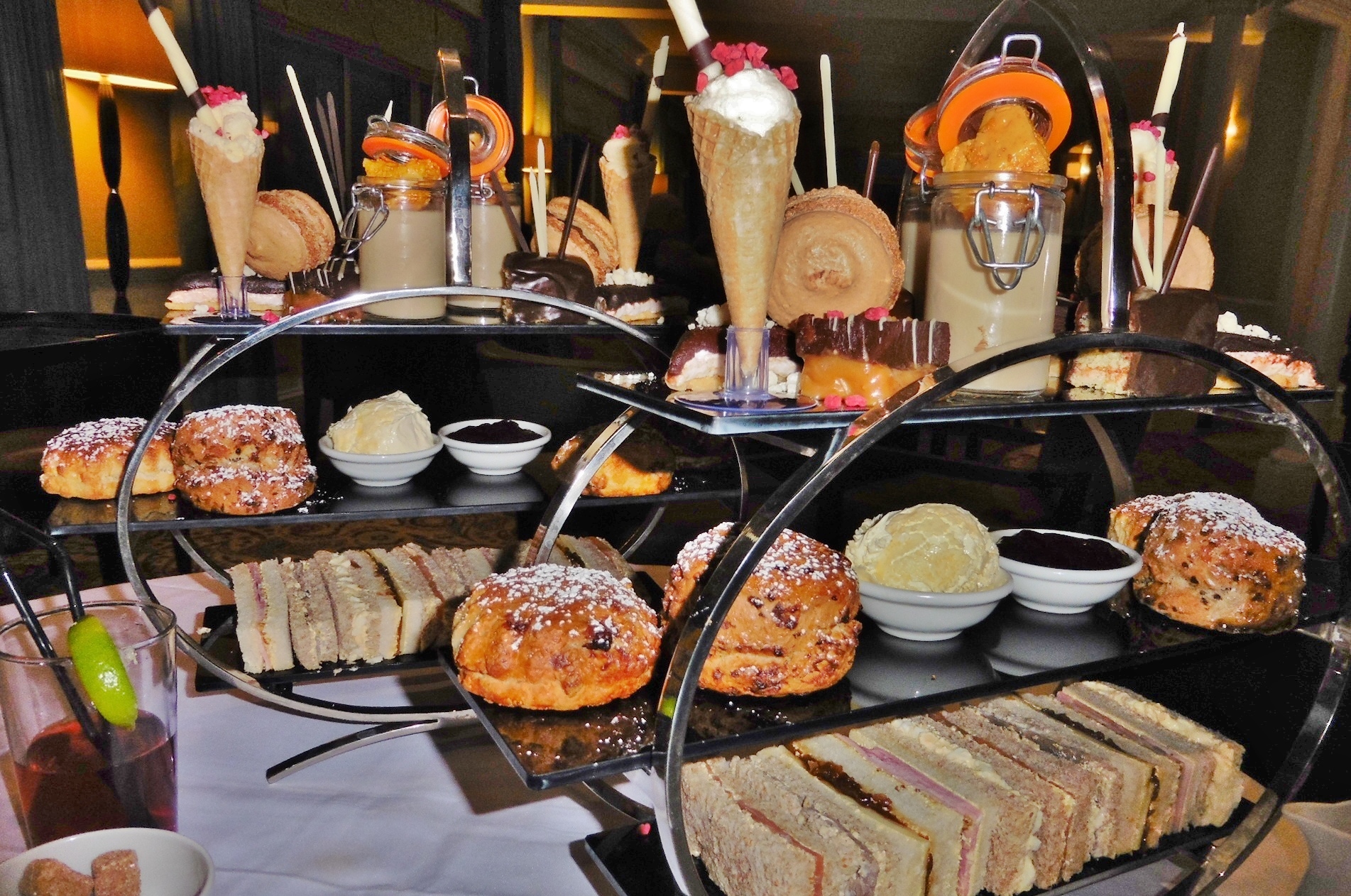 ”Chocolate Indulgence’’ afternoon tea at the Bournemouth Highcliff Marriott
.
Plus, there was a bottle of prosecco and a box of 12 white and dark truffles upon arrival.
The package guarantees a sea view room but we were upgraded to a suite with king-size bed, quality furnishings, two TVs, a Nespresso machine and a bathroom with separate shower.
Besides all the usual toiletries we were most impressed to also find a dental kit, shave kit, sewing kit, comb, bath salts, nail file and bottles of mouth wash and hand gel.
With the kids asleep in the sofa bed and travel cot, it was time to tuck into those truffles and pop that prosecco, watching the waves lap the shore in our Marriott bath robes and slippers.
Come morning, the breakfast in the two-AA Rosette Highcliff Grill was another good reason to delay any “new year, new you’’ fitness regime.
Last year, I reported that the extensive breakfast buffet at the Marriott hotel in Swansea was the best I’d ever had the good fortune to scoff.
And I found Bournemouth was a match for its Welsh cousin, with the added bonus of a freshly made, dinner plate-sized waffle covered, of course, in chocolate source.
I was also tempted by the chocolate muffins but feared they might trigger some sort of cocoa-induced seizure.
.

View from bedroom at the Bournemouth Highcliff Marriott
.
If you’re not a big chocolate eater, then the hotel has two other special packages until the end of April.
The healthier “Cleanse’’ option features welcome gifts of a bottle of mineral water and a freshly made smoothie plus an hour-long spa treatment – choose from a massage, facial, manicure or pedicure.
The “Retreat’’ package includes a 30-minute spa treatment plus a bottle of prosecco and fresh fruit on arrival at one of the hotel’s secluded, grade II-listed cottages, which once formed part of a coastguard station.
Every package includes breakfast, a sea-view room, a 2pm checkout, car parking and access to the leisure club.
But, take my advice, and indulge yourself. After all, it’s a long time until Christmas comes round again.
.
Travel file
Adrian Caffery stayed at the Bournemouth Highcliff Marriott as a guest of the owners. The overnight Indulgence and Retreat packages are priced from £200 for two people. The Cleanse package is priced from £240. They are available until April 30, 2016. For more information or to make a reservation, click here or call 01202 557702 Option 1 and quote ZJL. Packages are subject to availability and blackout dates may apply.
.
Published article here