An historic inn which has been owned or visited by four English monarchs is once more fit for a king.
A £1 million facelift has brought The Bear Hotel in Hungerford, Berkshire, into the present while respecting its character and illustrious past.
Dating back to the 13th century, the Bear was later owned by the Earls of Warwick and takes its name from their coat of arms (the Bear and Ragged Staff).
In 1540, Henry VIII presented the inn to his fourth wife, Anne of Cleves, and then two years later to his sixth and final wife, Katherine Parr.
Henry’s daughter, Elizabeth I, was a guest during her reign and the hotel was requisitioned by Charles I as his headquarters for the 2nd Battle of Newbury during the Civil War.
But the most notable chapter in the Bear’s history was in December 1688.
Having landed at Brixham in Devon, Prince William of Orange was advancing with his army towards London. While resting at The Bear, he met commissioners of James II.
Plans were put in place to pass the crown onto the prince and he duly became William III, ascending the throne jointly with his wife, Mary I, in the ‘Glorious Revolution’. 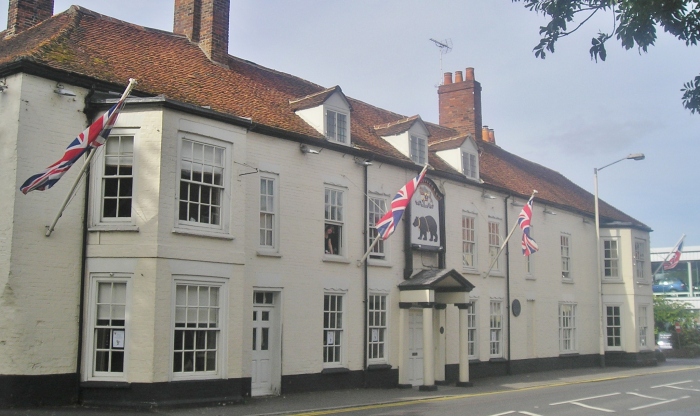 The Bear, Hungerford
/
Today, The Bear is in a battle of its own – to win back its good reputation after suffering from years of shameful under investment during corporate ownership.
Now in private hands, The Bear has been lovingly restored with a contemporary, clean design which complements the hotel’s older features.
Its 39 bedrooms (including three suites) have been stylishly redesigned and all feature broadband, Wi-Fi, trouser press, flat screen TV and modern bathrooms. Some overlook the tiny River Dunn.
The Brasserie Bar has been fully refurbished while The Snug adjacent has comfy sofas and a 42in plasma TV. There’s a separate bar and conservatory area that opens onto a riverside terrace and small, grassy island – perfect for a summer’s day.
Vastly experienced and award-winning chef Phil Ward heads the restaurant which serves up traditional favourites with imaginative flair.
It’s just a five-minute stroll to the Kennet and Avon Canal which runs past the town centre with its many independent shops and open market every Wednesday.
Hungerford is renowned as a prime location for antiques dealers and collectors.
There are two large antiques centres, several general antiques shops and many specialists. An antiques fair is held in the Town Hall on the last Saturday of every month.
To the west of Hungerford lies the historic town of Marlborough and Avebury Stone Circle while to the east is Newbury and the Victorian Highclere Castle.
And with excellent road links, you can be there from Birmingham in under 90 minutes.
/
Travel file
The Bear Hotel in Hungerford is just four miles south of Junction 14 of the M4. Double rooms cost from £99 a night during November and December, including a sumptuous breakfast, (subject to availability and based on two sharing).
The Bear is offering a Christmas package from just £115 per person. The price is based on two sharing and includes overnight accommodation and Champagne before a five-course Christmas Day lunch plus breakfast next morning. Call 01488 682 512 or click here