Santorini’s explosive history has left it with a rugged beauty that’s unlike anywhere else in the world.
When the volcanic island literally blew its top 3,500 years ago the Aegean sea rushed in to flood the crater and create a lagoon measuring 4x8km.
The volcano re-awoke in 200BC and threw up an island of lava. Another island was formed around 1550AD and this one is still getting bigger, with the most recent eruption in 1956.
Today, the stunning views of the crater (known locally as the Caldera) from the secluded hotels that cling to the top of molten cliffs attract the likes of Leonardo DiCaprio, Barbra Streisand and Jack Nicholson.

View of the Caldera from Firostefani
/
So it is such a shame that my abiding memory of Santorini is one that still gives me nightmares…
For centuries, donkeys have taken fishermen and tradesmen up and down the zigzag path between the island’s clifftop capital, Fira, and its old port, some 260m below.
Nowadays, most of the passengers are from the cruise ships anchored offshore. And the donkeys have been joined by mules, presumably to carry the larger American holidaymakers.
My wife Jayne and I had just started descending the 600 steps on foot and as we approached a blind bend we could hear excited laughing and the sound of animals being whipped into a gallop.
Suddenly, mules and donkeys came charging our way and in the unavoidable collision with one of the larger beasts I was knocked off my feet onto the cobbles and trampled on.
Battered, bloodied, bruised and smelling of the donkey doo I fell in, I at least had some words of comfort from the owner of the animals. Well, one word, anyway. ‘’Up,’’ he said as he trotted past.
Struggling to my feet, I looked to Jayne, who had been fortunate that the animals had raced either side of her. Very fortunate, in fact, because at the time she was 22 weeks pregnant.
Had she been in my shoes the possible consequences do not bear thinking about. But I did think about it – and it made my blood boil.
I furiously strode back up the hill to confront the owner. He simply shrugged his shoulders, pretended he could no longer speak English and sloped off looking for the next tourist euro.
So my advice to anyone wishing to visit the old port is to take the cable car.

Steps down to the harbour
/
Santorini, known in ancient times as Thera and linked with the legend of Atlantis, is the southern-most isle of the Cyclades (not off Italy as most of my friends thought).
Away from the Caldera, there are beaches of shingle and black and red volcanic sands. There are no trees on the island and the houses are built from volcanic rock.
The whitewashed villages are home to only 13,000 permanent residents but there are an incredible 352 churches, many with striking blue domes and ornate bell towers.
We travelled with our favourite tour operator, First Choice, and stayed at the recently refurbished, 4-sun Cliffside Suites in Firostefani, a romantic 10-minute walk along the rim of the Caldera from Fira.
The colourful hotel is set into the cliff so there are many steps to negotiate. Its 23 cave-like apartments are all different shapes and sizes and have terraces or balconies. 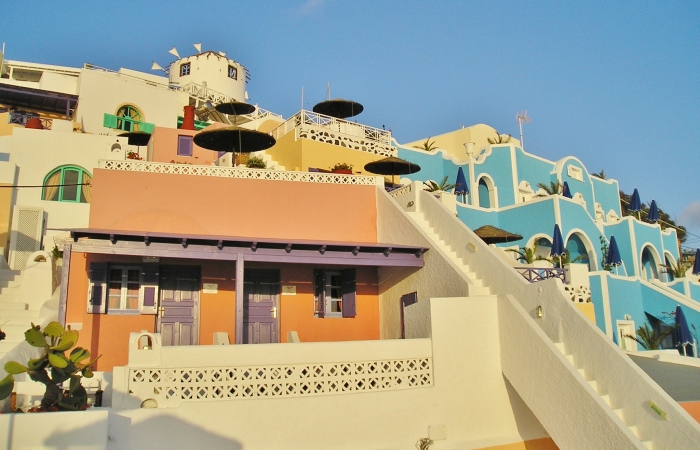 Cliffside Suites in Firostefani
/
Close by is a bakery, an off-licence, several restaurants and a handful of mini-markets, and the hotel is overlooked by a windmill that’s been converted into a chic cafe.
The pool may be small but what do you expect on the side of a cliff?
We never tired of the views from our private balcony of the Caldera, the passing cruise ships, the spectacular sunsets and the islands which represent the rebirth of the volcano.
You can take a cruise of the Caldera with First Choice.
The first stop is Nea Kameni (new burnt island) where you can hotfoot it to the steaming crater. Then, it’s on to Palea Kameni (old burnt island) for a swim in the thermal springs.
The cruise continues a short distance to the island of Thirassia , then on to Oia at the northern tip of Santorini, the prettiest of its villages.
You can also board a traditional sailing boat for a sunset cruise around the Caldera or take a coach tour of the island’s traditional villages and wineries.
But the trips to avoid are anything involving mules!

Fira
/
Travel file
The cost of a seven-night stay at Cliffside Suites on a bed and breakfast basis, departing Gatwick on September 25, 2007, starts from £705, based on two  adults sharing a double room. The price includes air passenger duty, flight supplements and fuel charges. There are also departures from Manchester. To find out more or to make a reservation call First Choice on 0870 850 3929, or book online at First Choice

Cliffside Suites in Firostefani
/
Santorini and the legend of the lost city of Atlantis
Around 355BC, Greek philosopher Plato wrote of a cultured civilisation which sank into the sea overnight amid devastating earthquakes and floods.
He called it Atlantis and scholars have been hotly debating its original location ever since – with Santorini and the island of Crete, 70 miles away, emerging as prime candidates.
Some 1,000 years before Plato, Santorini erupted in what was the largest explosion in Earth’s history – four times bigger than the 1883 eruption of Krakatoa in which 36,000 people died.
The material thrown up from its 1,000m volcanic cone created a huge vacuum. The volcano was sucked down into a watery abyss while what remained of the island was covered in a thick layer of pumice.
It’s believed a tsunami was created which slammed against the coast of Crete where Europe’s earliest and most advanced civilisation, the Minoan, was flourishing.
The giant waves destroyed its mighty navy then travelled inland, killing crops, flooding royal palaces, including Knossos, and triggering the collapse of the empire.
In 1967, archaeologists on Santorini unearthed a city at the foot of the volcano at Akrotiri. This cosmopolitan merchant harbour dated from before the explosion and had been preserved in lava.

Cruise liners in the Caldera, seen from Cliffside Suites
/
The colourful wall paintings which covered every room in every house were similar to those excavated on Crete, thereby revealing that the city was Minoan in origin.
So Santorini had an advanced civilisation and it disappeared beneath the waves (and pumice) overnight. So was it Atlantis? Or was Atlantis an expression of both Crete and Santorini?
Of course, Plato could have been making the whole thing up.
Atlantis or not, the Akrotiri site is now known as the ‘Pompeii of the Aegean’. But where it differs from the Roman city is that no valuables or skeletons were ever found in the excavations.
Damage to many of the two and three-storey buildings indicate that the city was abandoned by its inhabitants after an earthquake which probably triggered the volcano’s explosion some months later.
Unfortunately, the archaeological site is closed because of an ongoing court case following the death of a British tourist in 2003 when a roof protecting the remains collapsed.
But you can see  pottery and many of the famed wall paintings from Akrotiri at the Museum of Prehistoric Thera in Fira.