Avid readers of these travel pages may recall that my boating holidays are never without incident.
There was the time when traffic backed up after someone (me) couldn’t work out how to raise the barriers at the Shirley drawbridge on the Stratford Canal.
Then there was the time, near the famous Pontcysyllte Aqueduct, when we drifted into the path of other boats after someone (that’ll be me) failed to tie a proper knot in the mooring ropes.
And there was the time, unreported until now, when my wife fell from a towpath into the Brecon Canal after someone (yes, me again) didn’t throw her enough rope as we attempted to moor.
So it was no surprise when Mrs C, still scarred by events in Wales, took exception to my plan for a boating holiday on the Norfolk Broads. It was a case of Norfolk yes, boats no, no, no.
Never one to rock the boat, so to speak, I booked a property through Norfolk Country Cottages and discovered, to my delight, that you don’t need to set sail to explore the Broads.
Watts Cottage is in the very peaceful, one-pub village of Upton, ten miles east of bustling Norwich and two miles north of the small town of Acle, which has a couple of supermarkets.
The village, on the River Bure and on the edge of Upton Broad, is well placed for anyone wanting to discover the wetland’s lakes, marshes, windpumps, dykes and 125 miles of navigable waters.
/ 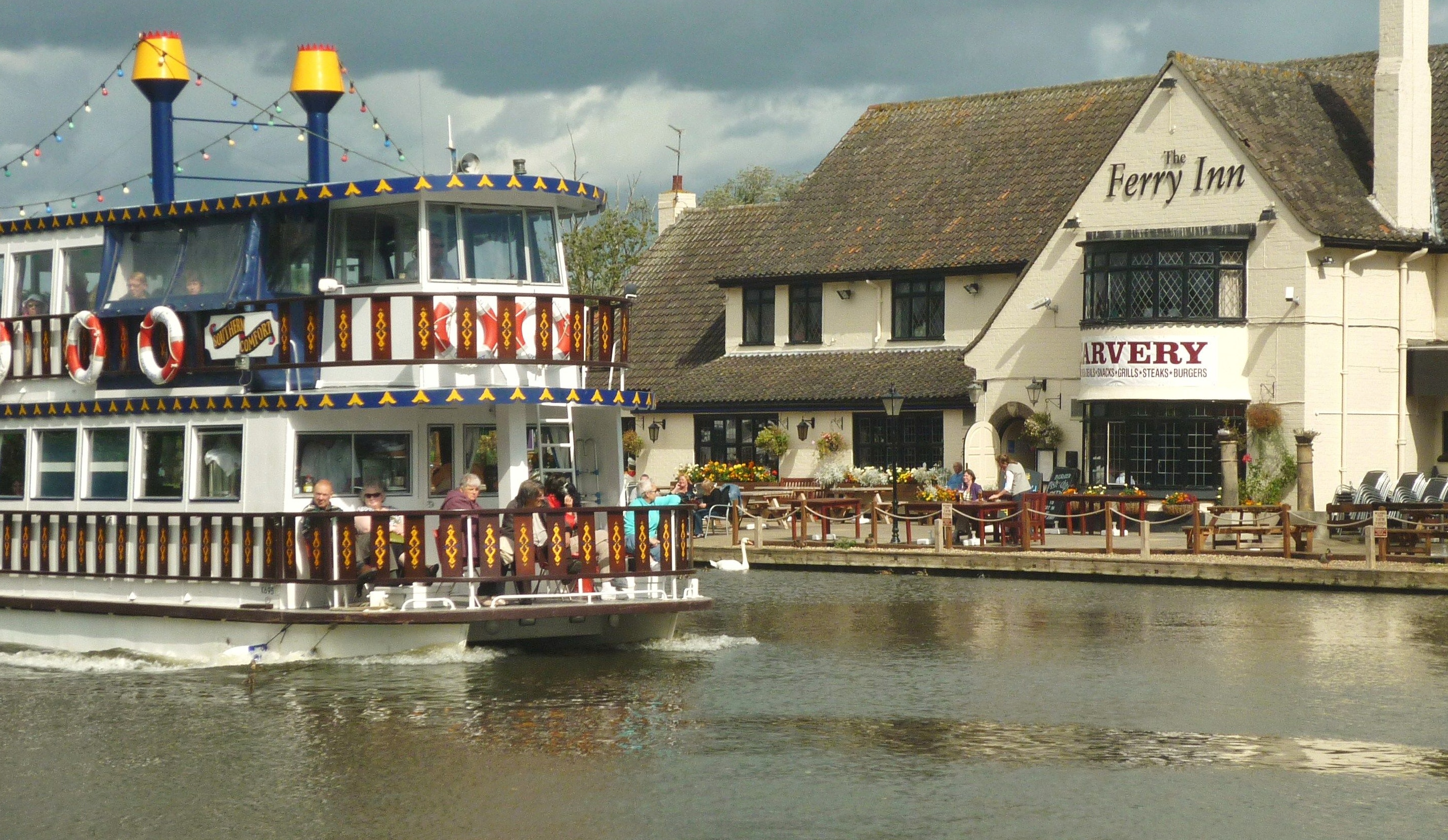 Horning
/
A short drive away is Fairhaven Water Gardens, a secret hideaway of woodland walks leading to South Walsham Inner Broad – and there’s free entry for Watts Cottage guests.
A little further down the road is Ranworth Church – celebrated as the ‘Cathedral of the Broads’ – where the brave and agile can climb its tower for terrific views of Malthouse Broad.
Close by, at the end of a winding wooden path through reed beds, is a thatched, floating wildlife centre with a viewing gallery across Ranworth Broad, a nature reserve that’s closed to traffic.
Of course, we were not confined to dry land and just past the picture postcard village of Woodbastwick we parked up and hailed a river taxi to take us to the Ferry Inn in Horning.
The Inn was largely destroyed in a Second World War bombing raid by the German Luftwaffe, killing 22 people including some pilots stationed at nearby RAF Coltishall.
Horning itself is perhaps the prettiest of all the Broads villages with pubs, tea-rooms and a lovely village green all on the riverside.
Best of all, it’s home to The Southern Comfort, a Mississippi-style paddle boat which we boarded (after some cajoling of Mrs C) for a one-and-a-half hour trip.
The commentary was informative and amusing and the thatched riverside properties we passed were simply stunning – a real glimpse into how the other half live.
/

Along the way we passed a wherry, a traditional Broads cargo boat with black sales on a hinged mast, only a handful of which have been presevered as pleasure boats.
Further afield, at How Hill, we visited an old marshman’s family home that’s now a museum, while at Hickling Broad we were charmed by the many thatched boat houses.
The Broads extend to Norfolk’s east coast where you can climb to the top of Horsey Windpump, now in the care of the National Trust, for views over Horsey Mere.
The windpump was abandoned in 1943 after being struck by lightning during a storm so fierce that the operator became entangled in the machinery and was crushed to death.
It is said his screams can still be heard on a gusty night!
Of course, there’s more to Norfolk than the Broads.
There are sandy beaches all along the coast and the traditional seaside resorts of Sea Palling, Caister and Great Yarmouth are within easy reach of Upton village.
One of the most remarkable beaches is near Horsey where a colony of grey seals fish yards from the shoreline and give birth to their pups on the sands in December and January.
Also close to Upton is Thrigby Hall Wildlife Gardens where there are some imaginative treetop walks and visitors are able to get up close to big cats and an adorable family of gibbons.
After our day outs, it was great to return to Watts Cottage, which has a well equipped kitchen and attractive sitting room featuring a woodburner (starter pack of fuel provided).
But the cottage’s main selling points are its huge conservatory and private garden with barbecue, patio and furniture. And, as Mrs C was quick to point out, you don’t get those with a boat.
/

/
Travel facts
Norfolk Country Cottages has been providing self-catering accommodation for 20 years and its 2012 brochure features the widest choice in the region. There are more than 400 properties of all styles and sizes ranging from chocolate-box country cottages and traditional seaside townhouses to designer barn conversions and chic city apartments in Norwich. All are VisitEngland graded – with many holding a coveted gold award – and more than half welcome pets. Short breaks are available at most properties. The 4-star, two-bedroom Watts Cottage costs from £373 to £665 for a week, £280 to £499 for a short break. To receive a brochure call  01603 871872. To take a virtual tour of the properties and to check availability and prices visit www.norfolkcottages.co.uk
/
Did you know?
The Norfolk Broads are shallow lakes connected by an intricate network of rivers or smaller streams.
The lakes were created when sea levels rose, flooding the peat pits dug since Roman times, despite the construction of windpumps and dykes to hold back the water.
Admiral Nelson learned to sail on the Broads.
/
Published article here