Many, many years before young Cerys was born, her mummy and I enjoyed a short break at Disneyland Paris.
We met Winnie The Pooh (Mrs C’s lifelong favourite) and a framed picture of that momentous occasion hangs on our three-year-old daughter’s bedroom wall.
It goes rather well with the Pooh curtains, Pooh rug, Pooh lampshade, Pooh bedding and the countless stuffed Poohs, Tiggers, Piglets and Eyeores.
About a year ago, however, we started to feel guilty. Afterall, we had met Pooh but Cerys hadn’t. And that picture seemed to be rubbing her nose in it every day.
We hadn’t planned on taking her to Disneyland Paris until she was a few years older and our bank statements last autumn suggested we would be wise to wait.
But we found ways to cut a few financial corners and, hi ho hi ho, we were off to the Magic Kingdom before you could say supercalifragilistic… etc.
So here are the seven ways – one for each of Snow White’s dwarfs – we made the most of our break by making our Mickey Mouse money go further…
.

..Pooh and friends on parade at Disneyland Paris
.
1. Add an extra day to get better  value
We were originally looking at a three-night break but discovered that booking a fourth night only cost about £60 more for the three of us, which is incredible value when you consider that day tickets for one person cost that much. We were also glad of the extra day to fit in all the rides and entertainment.
.
2. Walk a little further, save a little more
There are six hotels at Disneyland Paris and we booked the cheapest room at the cheapest hotel. As far as we could work out, Hotel Sante Fe’s only drawback compared to the other hotels is that it’s a little further away from the fun. Most guests jump on the regular shuttle buses – but this can spoil the magic. We rang ahead and requested a room in the corner of the sprawling hotel nearest the theme park. From there, it was just a 15-minute stroll along a canal, which was delightful with the trees showing their autumn colours.
.
3. The most important meal of the day
Breakfast was the only meal included in our booking – so we made the most of it. It was only a cold buffet but there was plenty of it with cheese, ham, toast and a wide choice of cereals and pastries. We ate until it hurt – and patted ourselves on the back when we saw the cost of a burger in the park. We spotted some guests taking the odd roll or banana from the buffet to eat later but, of course, I would never condone that kind of behaviour…
. 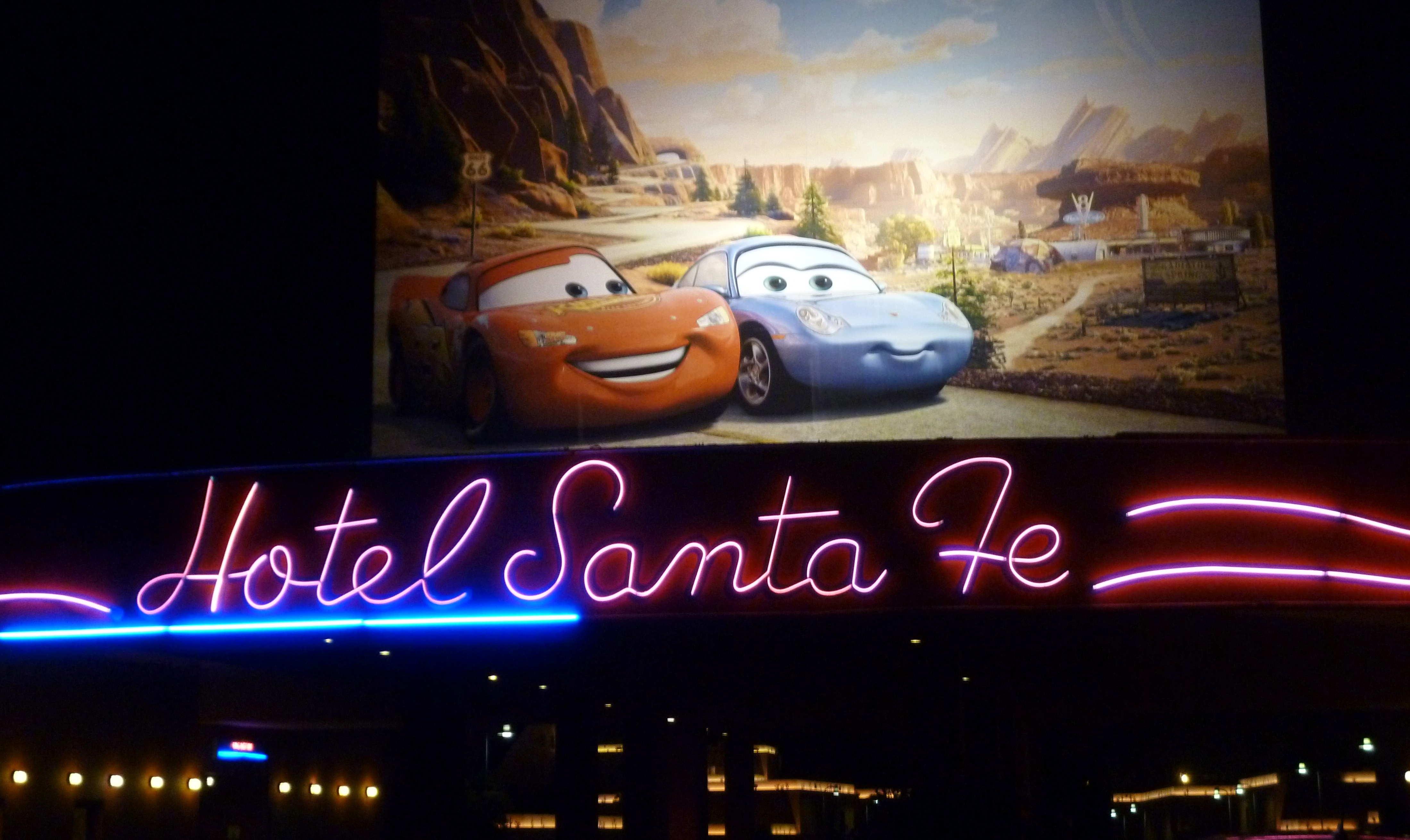 Hotel Santa Fe, Disneyland Paris
.
4. Get your snacks outside the park
Another reason to stay at Hotel Santa Fe is that a two-minute walk from reception is a fuel filling station with a convenience shop. Here, we were able to buy snacks and drinks for a fraction of the cost in the park. And despite a supposed ban on picnics in the theme park, our bags were never searched at the turnstiles. The bottles of water we bought also came in useful for making hot drinks in our room (we took a travel kettle).
.
5. Taking the Mickey at breakfast table
We had a ‘‘character breakfast’’ on our last morning. We baulked at the cost of this at first but it worked out good value. There is a big discount for Disneyland guests and the hot – yes, hot! – buffet is excellent. The breakfast also provided some of the highlights of our holiday, including Mickey making a grab for my eggs and bacon and Pluto spoon-feeding our daughter her cereal (and making a right old mess).
.

Character breakfast at Disneyland Paris
.
6. Take your own snaps of Disney characters
Whenever we spotted a Disney character, there was always an official Disney photographer in tow. And the photos they take are not cheap to buy. However, they are always happy for you to take your own photos and the characters are always generous with their time. One photographer even offered to use our camera to take a family photo of us with Donald Duck.
.
7. Choose your pre-Paris stopover wisely
We travelled to Disneyland by Eurostar. Direct services leave London at 10.15am but getting to the capital that early can be tricky, especially with kids in tow. Plus, they’ll need a good night’s sleep with all the fun that awaits. I recommend travelling south the day before. Of course, staying overnight in London is not cheap so the best option is to hop on the train at Ebbsfleet station in Kent – where the parking is plentiful and reasonably priced – staying the night before in one of the many budget hotels nearby. You can dine and get last-minute essentials at the nearby Blue Water shopping centre where there’s also plenty to keep kids entertained.
.

The ever popular Dumbo ride at Disneyland Paris
,
PS. The good news is that Cerys got a high five from Pooh during one of the parades.The bad news is that, as you can see from the published report (link below), her dad failed to get a nice picture for her bedroom wall.
Oh well, better start saving for another trip to Disneyland!
.
Travel file
Adrian travelled to Disneyland Paris courtesy of Eurostar, which operates a daily direct service to the Magic Kingdom’s own station, Marne-la-Vallée (except Tuesdays and Saturdays outside school holidays). Fares are from £69 standard class return for adults and £49 return for children aged four to 11. Children under four travel free but are not allocated a seat. Standard Premier travel is from £159 return for adults and £111 return for children. Connecting fares are available from more than 200 stations in the UK. The journey time is two hours 47 minutes from London and two hours 27 minutes from Ebbsfleet.  There are up to 18 daily Eurostar services from London to Paris Gare du Nord. Passengers bound for Disneyland can catch the RER – the fast train service which serves central Paris and the suburbs – to Disneyland, changing once at Châtelet-les-Halles. This journey takes around 45 minutes. Tickets are available from eurostar.com or on 08432 186 186. For information on breaks at Disneyland visit www.disneylandparis.co.uk
Published report here