It’s a tale to melt the heart of every dog owner.
One day back in the 13th century, the Welsh prince Llywelyn The Great went hunting, leaving his faithful hound Gelert at the palace with his baby son.
On Llywelyn’s return, Gelert joyfully sprang into his master’s arms – but his jaws were smeared with blood. Alarmed, the prince rushed to his son’s room. The cot was empty, the bedsheets also bloodied.
Believing he’d been betrayed, Llywelyn thrust his sword into Gelert’s side. The dog’s dying yelp, however, was answered by a baby’s cry. The sound led Llywelyn to his unharmed son.
Lying nearby was the lifeless body of a great wolf which Gelert had killed to protect the infant. The prince, realising his terrible mistake, is said to have never smiled again…
Of course, it’s probably just a shaggy dog story.
Nevertheless, in the pretty Welsh village of Beddgelert (meaning Gelert’s grave) stands a large rock marking the supposed final resting place of Llywelyn’s pet.
.

The stone marking the grave of the dog Gelert, Beddgelert
.
Just across a field from the rock is Coed Gelert, a small group of five-star cottages where my wife and I and our three-year-old daughter Cerys enjoyed a long weekend in March.
Beddgelert has a range of amenities including inns and cafes serving a la carte meals, bar snacks, fresh pizzas, fish and chips and locally-made, award-winning ice cream.
Located in the heart of Snowdonia, where the rivers Glaslyn and Colwyn meet, the village is the perfect base for keen walkers, as well as cyclist and canoeists.
But the area has a fantastic range of attractions to keep the whole family entertained.
Within walking distance is Sygun Copper Mines, where you’ll find winding tunnels and colourful chambers with stalactite and stalagmite formations.
Beddgelert is also a stop on the route of the Welsh Highland Railway.
The steam-hauled trains travel 25 miles between Caernarfon station (a stone’s throw from the historic castle) on the north coast to Porthmadog on the west coast.
Discounted fairs are available for Coed Gelert guests.
The WHR’s western terminus is shared with the Ffestiniog Railway, built in 1836 to carry quarried slate the 13 miles from the mountains at Blaenau Ffestiniog to the sea.
Unfortunately, these two great little railways were still closed for winter during our visit but we were able to get on track elsewhere in Snowdonia, at Llanberis to be precise.
The village sits at the foot of Snowdon, the highest peak in England and Wales, but owes its existence to a mountain called Elidir on the opposite side of Lake Peris.
The slopes of Elidir once formed the Dinorwic slate quarry, the second largest in the world, and the scars are still very evident today.
In 1842, a railway was opened to take the finished slate to a port on the Menai Straits.
The quarry closed in 1969 but a few years later part of the line was reopened as a tourist attraction, using the same vintage steam engines.
Today, the Llanberis Lake Railway runs along the shores of Lake Padarn, passing the 13th century Dolbadarn Castle, built by the alleged dog murderer Llywelyn.
. 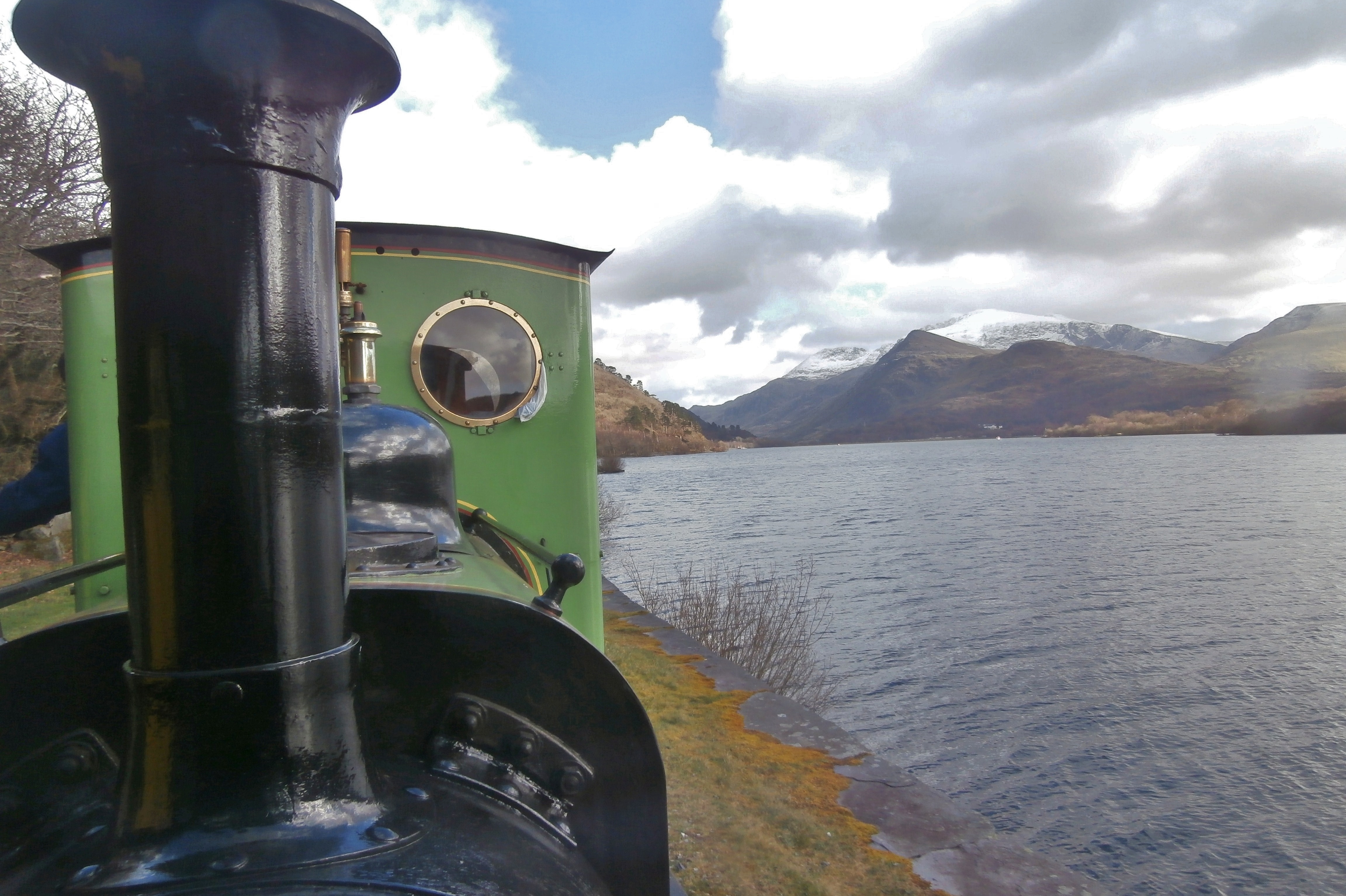 Llanberis Lake Railway
.
The hour-long, five-mile return journey is a leisurely way to enjoy views across to the Snowdonia range that were once the exclusive preserve of quarry men.
The other small railway in Llanberis runs up Mount Snowdon.
Although the train was operating during our visit, the snow-topped summit (where the cafe has been transformed in an £8m project) was out of reach so we decided to leave that until next time.
Five years after the Dinorwic slate quarry was closed, Elidir became the unsung hero of every tea-drinking Coronation Street fan in the land.
The mountain was chosen as the site for a new fast response power station and work began on Europe’s largest excavation project, taking 10 years and costing £425 million.
A chamber 51m high, 180m long and 23m wide was dug deep into the mountain to house the power station, along with 10 miles of tunnels.
Water from an upper reservoir high up on Elidir is discharged through turbines in the chamber and into Lake Peris, then pumped back up during off-peak times.
The electricity generated can instantly meet the demands of millions of kettles being switched on during the ad breaks of popular TV shows or as their end credits start to roll.
The power station has become another of Llanberis’ many attractions, dramatically rebranded Electric Mountain.
Stepping off the bus which took me on a mind-blowing, hour-long tour of the cavern was like entering the lair of a super villain in a James Bond movie.
, 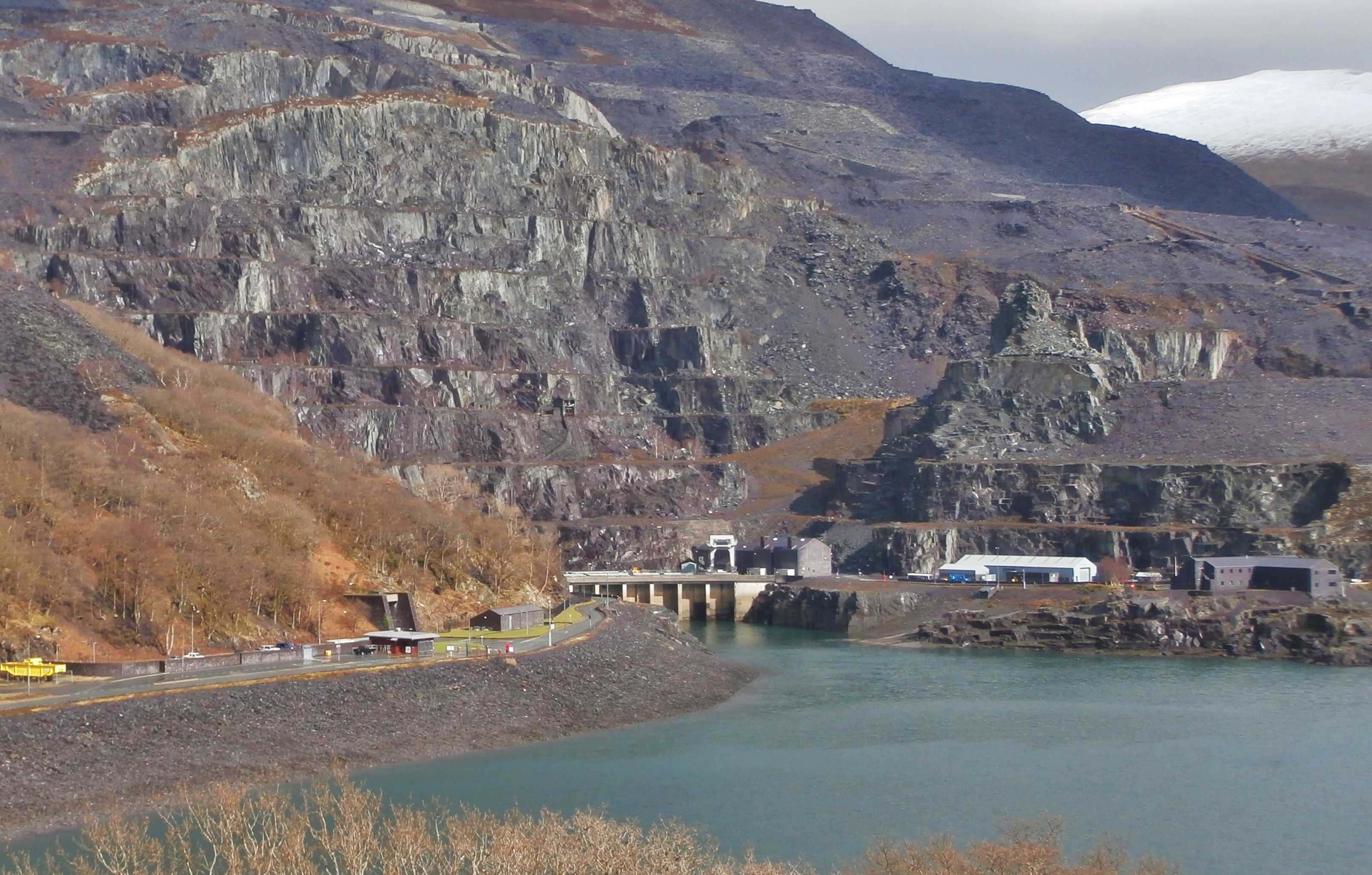 Electric Mountain, Llanberis
,
Cerys was a little too young to join the tour so mum took her to The Den, an excellent soft play area at Electric Mountain’s free to enter visitor centre.
Another fascinating day was spent at Greenwood Forest Park, near Caernarfon, which is home to the world’s first people-powered rollercoaster.
The Green Dragon uses the funicular system developed in the Welsh mines.
Riders walk up a hill to a cabin which then slides down a track, raising the empty coaster, via a pulley system, to a top station. The riders then climb the hill again to board the coaster, with gravity doing the rest.
It’s hard work but worth it when the coaster hits its top speed of 25mph.
Greenwood is also home to lots more eco-friendly fun including karts, canoes, treehouses, a barefoot trail and the longest sledge run in Wales.
On the Sunday we went to church, as you do. This was no ordinary church, though. No prayers or hymns, but it was certainly a heavenly place for Cerys.
The church in question has been turned into The Fun Centre, an enormous soft play area in Caernarfon.
There are the usual ball pools and rope bridges but what really separates the toddlers from the teens here are the 25ft drop vertical slides.
They are such a thrill that the centre hosts adults-only evenings.
No break in Snowdonia is ever complete without a visit to the fairy-tale village of Portmeirion, one of my favourite places in Britain.
,

Portmeirion
,
This ‘‘home for fallen buildings’’ – several were saved from demolition – is a mix of contrasting classical, palladian, arts & crafts and gothic styles that somehow gel perfectly.
With its fountains, grotto, lighthouse, Italianate bell tower and optical illusions galore, its a uniquely magical place.
We were given the VIP treatment and taken on a buggy tour of the village and some of its 19 miles of sub-tropical woodland and coastal trails (in the same vehicle used by Charles and Camilla, no less).
Our guide regaled us with tales of celebrities who have stayed in the self-catering cottages, including George Harrison, Brian Epstein and Noel Coward, who wrote Blythe Spirit in five days there.
And he told us how the pet cemetery was established by one of Portmeirion’s eccentric tenants, who preferred the company of dogs to humans and would read The Bible to them from behind a screen.
Unlike in Beddgelert, there’s no reason to suspect they were sent to doggy heaven via the thrust of a sword.
.

Green Dragon ride at Greenwood Forest Park
.
Travel file
Adrian was a guest of Attractions Of Snowdonia. Details of all the places he visited can be found at www.attractionsofsnowdonia.com.
Adrian stayed at Coed Gelert in Beddgelert, a purpose-built development of three two-bedroomed cottages and two three-bedroomed cottages. They are all very well equipped and furnished to a high standard. Each cottage has its own enclosed garden and parking. The owners live on site to ensure a warm welcome. The Snowdon Sherpa bus service, giving easy access to other areas of the national park, stops within a few yards. For more information call Joan Firth on 01766 890880 or email glaslyn.leisure@gateway.net or click on www.snowdonia-cottages.net