Whoever said you never forget how to ride a bike was a liar – and should be forced to sit on the thinnest of racing saddles for all eternity.
When I got my leg over, so to speak, for the first time in nigh on 30 years I was as wobbly as a plate of jelly operating a pneumatic drill.
I was shocked to discover that the hundreds of hours I’d spent on static exercise bikes between the ages of 13 and 42 counted for absolutely nothing.
My Bambi on ice theatrics raised a smile from staff at our holiday centre’s ,
cycle hire shop but my wife, Jayne, failed to see the funny side.
She was horrified at the thought of our two-year-old daughter Cerys being towed around in the trailer that was attached to my rear wheel.
And so at her insistence, before setting off on the open roads, we did a few practice laps around the holiday centre.
We were staying near Fordingbridge, on the western edge of the New Forest national park, in a 120-acre village called, ahem, Sandy Balls.
. Sandy Balls, near Fordingbridge
/
Yes, it may sound like a nudist camp from a Carry On film but, titter ye not, there’s a perfectly sensible explanation for its smutty-sounding name.
It can be traced back to the 1400s when the word ‘Sandyballas’, describing the area’s dome-shaped sand and gravel outcrops, appeared on maps.
You can still see a couple of balls today (stop laughing at the back!).
Management admit that over the years they have toyed with the idea of changing the name to something more representative of a five-star holiday centre.
Buy they’ve decided instead to embrace the memorable moniker and a cheeky TV advert in 2010 was featured on TV’s Have I Got News For You.
Anyway, back to the bikes. Within a few minutes of leaving the gates of Sandy Balls we were pedalling along quiet country lanes.
Memories of joyful hours on my old Grifter and Chopper bikes came flooding back and I began to wonder what I’d been missing all these years.
My daughter, oblivious to the danger my wife still seemed to think she was in, was happily taking in the views from the enclosed trailer.
. 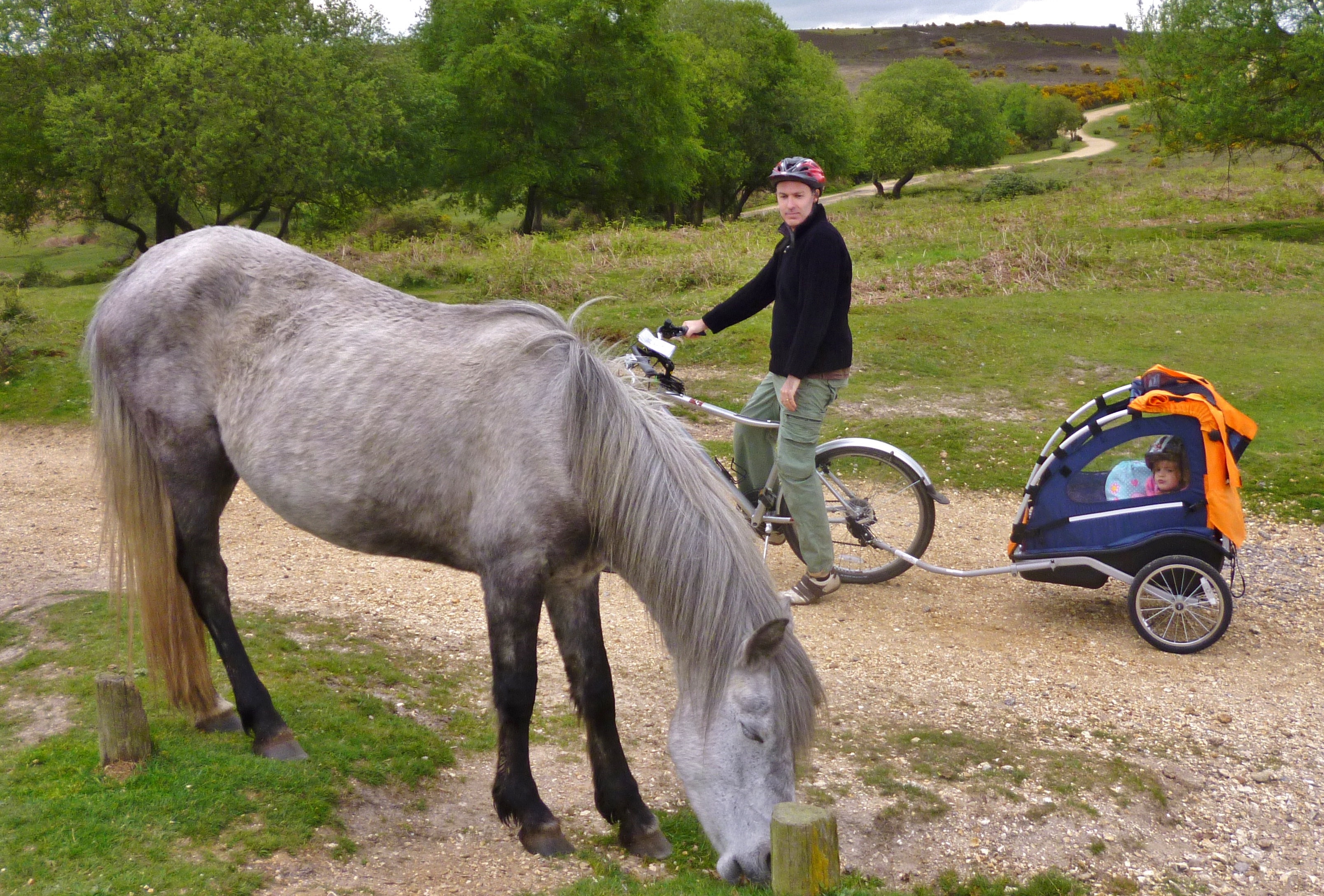 Bike ride through New Forest from Sandy Balls
.
After lunch in the beer garden of a friendly village pub, we joined a cycle-friendly path across heath land in search of the famous New Forest horses.
Our quest was over in no time and the horses happily posed for photos before we cycled safely back to our wooden lodge, nestled in tall trees.
We spent the following day cruising all around the New Forest in our car.
It very much reminded me of a trip to a safari park, only without the fear of giraffes dribbling through the sunroof and monkeys ripping off your wipers.
Perhaps there’s a drive-through attraction somewhere in Africa that’s recreated the New Forest… but I digress.
Besides the horses here, there and everywhere, we came across donkeys in a car park and cows lazing beside a traffic island.
There were herds of deer, too, although they seemed much more familiar with the Green Cross Code than the horses, cows and donkeys.
. 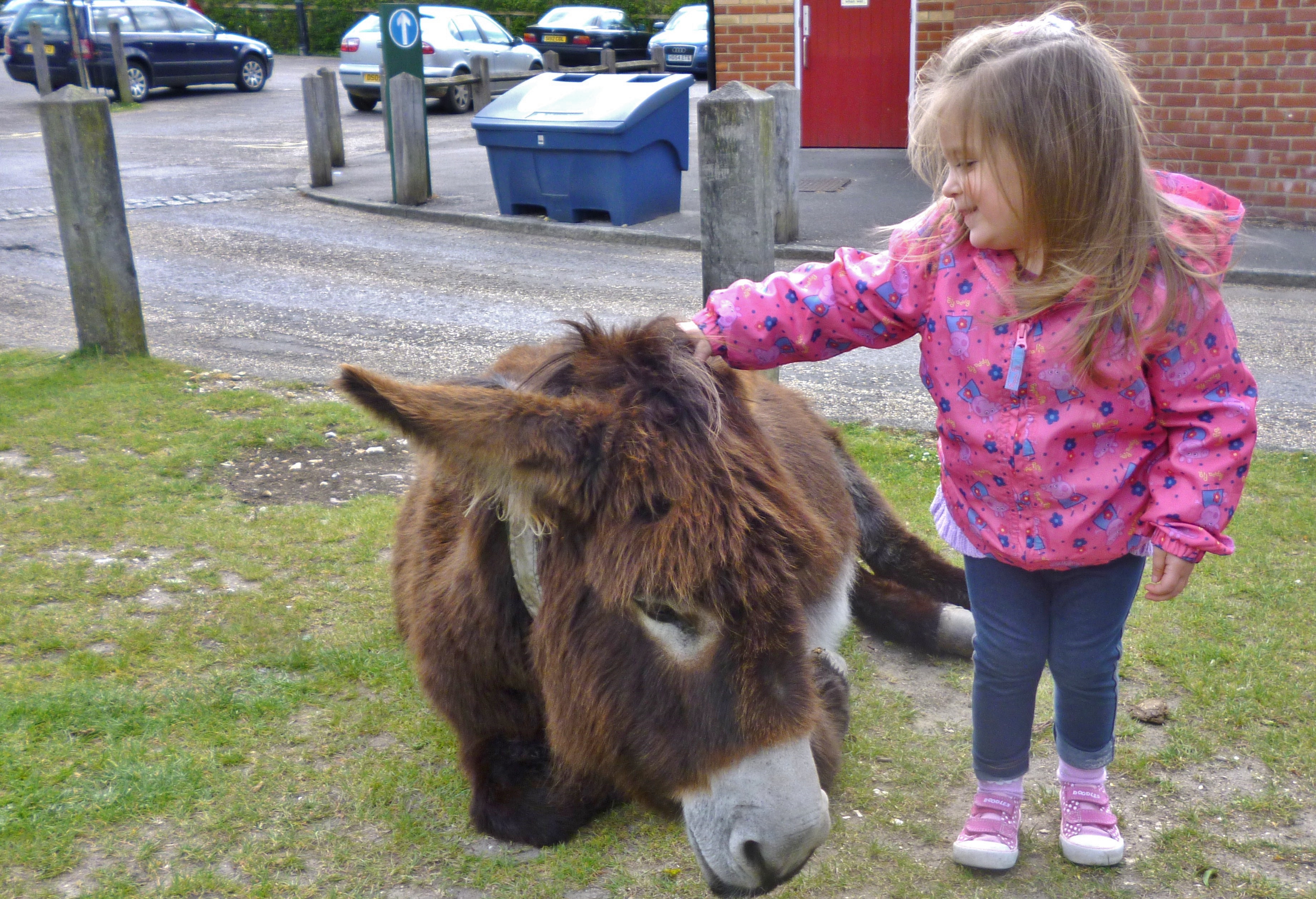 One of the donkeys who patrol the car parks
.
The New Forest’s wildlife is one of the many reasons Sandy Balls welcomes 70,000 guests a year.
Committed to protecting its environment, the holiday centre has won gold in the David Bellamy Conservation Awards for 16 years running.
Still owned by the same family that established it 90 years ago, its facilities are all within the safe haven of a pedestrianised piazza.
There’s a country store, a family pub and an Italian-style restaurant – with a large terrace – which operates a pizza takeaway service.
The leisure centre offers beauty treatments and features an indoor pool, seasonal outdoor pool, whirlpool, sauna and gym.
There are three playgrounds plus an indoor soft play area and on summer evenings the entertainment includes magicians, family discos, live music and comedians.
The cycle centre hires out mountains bikes, tandems, tagalongs and, as mentioned, trailers for children (dogs can also ride in them).
. 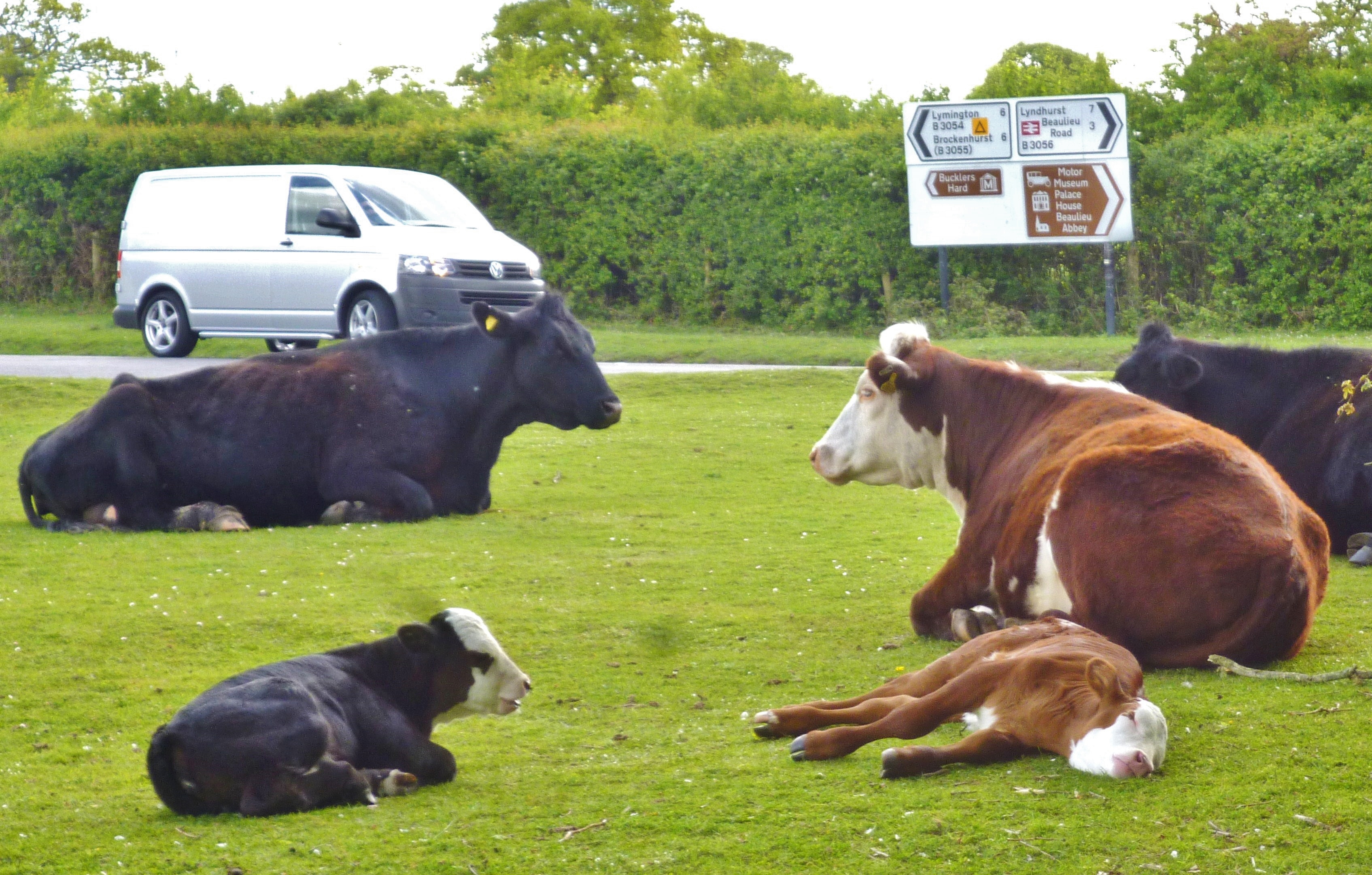 Herd of cows of a traffic island
.
Activities on site and around the New Forest include pony trekking, fishing, windsurfing, kayaking, archery, bug hunts and combat games.
If it’s beaches that you’re after then Bournemouth’s seven miles of golden sands are less than 20 miles away.
Much closer to Sandy Balls are a couple of very popular, all-weather attractions – Beaulieu Motor Museum and Paultons Park, which is also home to Peppa Pig World.
Our daughter Cerys is a big fan of the cartoon porker famous for splashing in muddy puddles and was thrilled by the seven Peppa-themed rides.
You could say she was as happy as a pig in…
She was 90cm tall at the time, which meant she got in for free but was just about tall enough to go on many of the bigger rides in the main park.
To my surprise, this included rollercoasters, the pirate ship and an exhilarating descent in a rubber dinghy which certainly turned my knuckles white.
There were many more rides just for young children in the main park.
Of course, the highlight was meeting Peppa herself – very fitting for a holiday in which farmyard animals played such a major part.
. Peppa Pig World, Paultons Park
.
Travel file
Adrian was a guest of Sandy Balls and stayed in one of its 113 wooden lodges (sleeping 2, 4 or 6) each with personal barbecues and picnic areas.
There are a further 35 caravan holiday homes sleeping four plus 225 touring pitches for caravans and campers. Ready Tents – set up for you on arrival – are also offered. They feature individual beds and a dining area. Crockery, cutlery, a camping stove and even a fridge is included.
A mid-week lodge break in winter costs from £129 (sleeping two) to £179 (sleeping six). A seven-night lodge break in peak season costs from £1,199 (sleeping four). Call 0844 693 2949 or visit www.sandyballs.co.uk
.
From Saturday November 16, Paultons Park will be home to an enchanted festive Wonderland complete with a snowy grotto. Children will meet Santa’s elves in the toy factory, see Rudolph do a dance and watch a Christmas adventure film at the park’s 4D cinema.
Tickets for Paultons Park and Santa’s Christmas Wonderland cost from £20.75 and include a gift plus entrance to Peppa Pig World, which will feature festive illuminations. All visits must be pre-booked.
Normal entrance to Paultons Park (when booked in advance online) is £22.50, saving £3, and £86 for a family of four, saving £12. Children under one metre tall are admitted free. See paultonspark.co.uk for details and opening times.
.
Published article here